The last 10 days or so has seen a gradual slide from the birding excesses of fall to the more serene nature of winter. But that is not to say that it has not been worth going out. Though winter may be cold at Cape May, it still offers some fabulous birding opportunities and anyone to the north and west of us would delight in just how relatively balmy it actually is!

Bird highlights certainly continue on a daily basis here, with reports of Cave Swallow flocks and 'kipping' flocks of Red Crossbills still coming in - look for the former over The Meadows or state park ponds, the latter in Japanese Black Pines around the dune cross-overs. Winter finches continue to be on the news with the odd report of Common Redpolls here and there, though no significant numbers (yet) and most birds have been passing quickly by - though Tom Reed had both this species and Yellow-headed Blackbird at his feeder on Reeds Beach Road this past week! (By the way, don't mention the latter to him if you visit the Hawkwatch - sore point!). Reeds Beach Road also featured a juvenile White Ibis from 19th to 22nd. Late warblers have continued to be a feature this November, with Orange-crowned Warbler at the Hawkwatch on 16th, Wilson's Warbler at The Beanery on 17th, Blackpoll Warbler at Harvard Avenue on 19th and a Yellow-breasted Chat at Higbee Beach on 24th, though the first and last of these typically occur late here, sometimes even overwintering.

The streets of Cape May Point continue to produce some interesting birding now, especially with crossbills still to be found there, as well as a continuing high number of Red-breasted Nuthatches. In addition, Chris Vogel reported a Clay-colored Sparrow at West Lake Drive on 20th and Lake Lily holds a nice selection of birds currently, including several Buffleheads, Ring-necked and Ruddy Ducks, the continuing Cackling Goose and, on 24th, a Greater White-fronted Goose. The state park had a small flock of Evening Grosbeaks briefly on 20th, reported by Pete Dunne, while Tom Reed reported a Brown Pelican over there on 21st, as well as a peculiar raptor the same day that showed suggestions of being a hybrid Red-tailed x Swainson's Hawk, based on structure and plumage characteristics.

Further north, the Avalon Seawatch has been a little quiet of late but will no doubt really pick up soon. Recent reports include Razorbill and Pacific Loon on 20th and a Harlequin Duck on 24th. Other interesting waterfowl of late include two male Common Eiders at the concrete ship on 23rd and eight Tundra Swans flying west at Cove Pool on 24th. Recent reports from the backbays have been few, but Clay Sutton reported a count of 270 American Oystercatchers at Hereford Inlet on 19th, while Bob Lubberman of The Osprey found a Whimbrel still hanging out on Jarvis Sound on 23rd. One or two reports of Ring-necked Pheasants have come from the fields around the Cape May/Atlantic County border recently, which presumably all relate to birds that have just been released into Tuckahoe WMA in the past couple of weeks.

Finally from today (24th), Nick Kontonicolas reported an Ash-throated Flycatcher from Higbee Beach today. The bird was seen by a number of people before disappearing late morning, but we can hope for more yet... 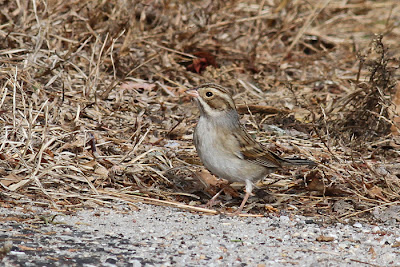 Clay-colored Sparrow at West Lake Drive, November 20th. This essentially Western species is now expected in small numbers each year, especially in fall. Look for a slender bird like a Chipping Sparrow but paler and with no dark line from bill to eye [photo by Mike Crewe]. 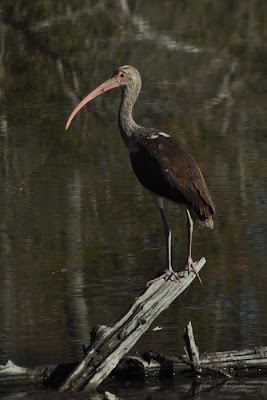 Juvenile White Ibis at Reeds Beach Road, November 21st. The small pond on the north side of Reeds Beach Road has a good track record for attracting interesting waterbirds and is worth checking regularly [photo by Will Kerling]. 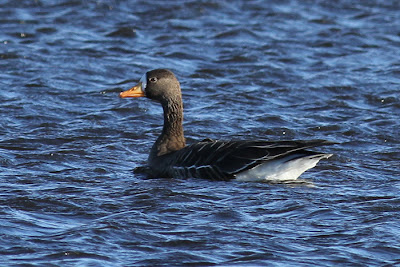 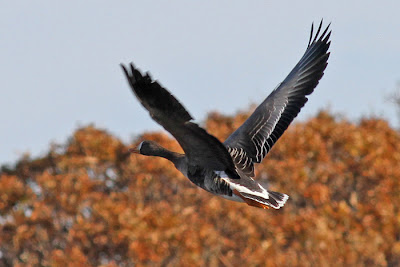 The same Greater White-front - note here the extensive black markings on the belly, typical of adults of the form flavirostris. It is possible that all records of single birds in recent years may relate to the same bird which has returned to a favored wintering area that it may originally have found by accident [photo by Mike Crewe]. 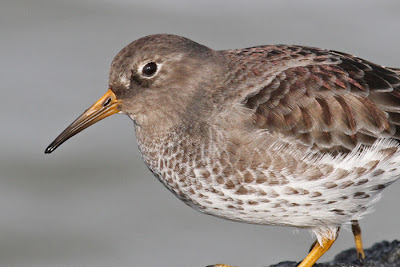 Heading into winter - Purple Sandpipers are on our jetties right now and should be here all winter. Note on this bird the subtle purple sheen on the back feathers that gives the bird its English name. Don't forget that this species will be one of the stars of our Barnegat trip on December 1st, along with those magnificent Harlequin Ducks and much more... [photo by Mike Crewe]. 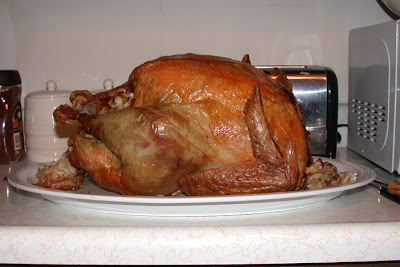 The status of this species in Cape May is peculiar, but shows a constant pattern year on year. They appear in huge numbers, scattered throughout the whole county, on the third Thursday in November every year, then disappear as suddenly as they arrived! I trust you all had a great Thanksgiving! [Photo by the only person here daft enough to bother...]