Being stuck indoors is never a pleasant experience for a naturalist, but as I look out of my office window and draw lots on when, not if, the trees outside blow down (and in what order!), then being indoors is not such a bad thing. It really is a rough old day out there today. As I drove to work through Cape May this morning, it was sad to see just how much trash was blowing through the streets and scattering across the landscape, since Wednesday is collection day. If you're concerned about the environment as I am, you might consider not putting the trash out on the street if the forecast looks too windy; I always check the weather the night before and skip a week if it looks like it's going to be stormy - it's not difficult to do and does help our Cape May landscape. I also put it out on the morning of collection rather than the night before, that way, Reggie and Ronnie, our two resident Raccoons, don't turf it all out and make a mess in their own inimitable way (don't you just adore those lovable rogues?!).

Well, being confined to barracks does allow time to catch up on emails and to go through some of the great pictures of Cape May wildlife that I get sent. So, on a wet, windy and generally horrible day, here's some wonderful images to get you through to the next sunny one...

A small pond in Linwood has been favored by this Belted Kingfisher lately and a few conveniently-placed poles are offering it some useful feeding opportunities. Note the rusty chest band, that tells us this is a female [photo by EJ Nistico]. 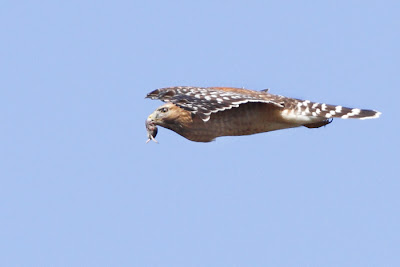 Adult Red-shouldered Hawks are colorful birds, with their rufous-washed body and strongly-marked wings and tail. Being smaller than Red-tails they feed on smaller prey, so no rabbit or squirrel at the state park for this guy, it looks like he's got a shrew! [photo by EJ Nistico] 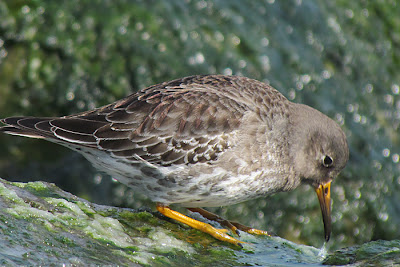 Purple Sandpipers feature regularly in our blog - and for good reason, as they are interesting to watch and often quite readily approachable. That's not to say you don't need a little skill and guile to get a good shot though! [Photo by Lisa Ryan] 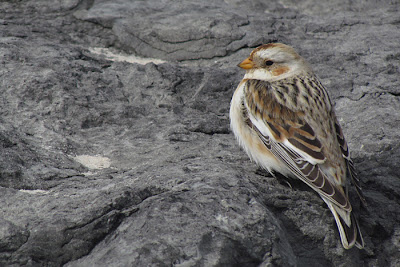 Here's a bird that features a lot less often here, as they have a habit of being far more skittish than the Purple Sandpipers. This Snow Bunting was on the jetty at Barnegat Light and, for once, decided to pose nicely [photo by Lisa Ryan]. 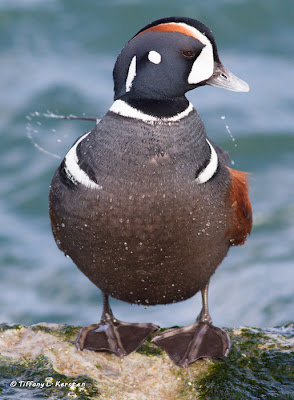 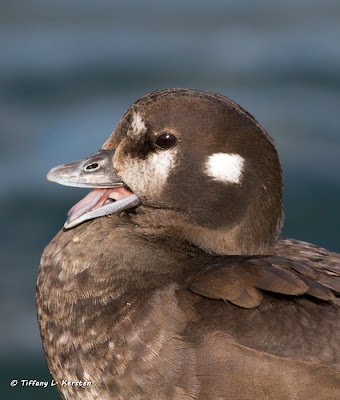 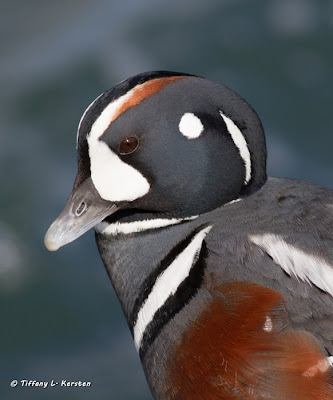 Of course, it wouldn't be winter in New Jersey if we didn't keep you supplied with a regular dose of Barnegat Harlequin Ducks. These birds were designed with cameras in mind and rarely fail to please. Take time to let your subjects get used to you and you'll find it easier to win their confidence and get some great close-ups like these [photos by Tiffany Kersten].
Posted by Mike Crewe at 3:22 PM