The forecast looks set for a dry weekend at Cape May and temperatures just starting to creep up a little into the bottom end of the 'pleasant' zone. A cloudless sky this morning made for a more enjoyable drive to work than yesterday, when the highlight was a very soggy and very unhappy-looking Red-shouldered Hawk, huddled up tight beside a phone pole. This morning, birds are singing, Canada Geese are feeding out in the fields and Black Vultures are doing the early morning run of the streets.

The slow trickle of early migrants continues, with Tom Reed reporting three Wood Ducks heading north past Sunset Beach yesterday morning. I have no doubt that Tom was out on the very last day of the month, desperately trying for that 2013 LAGU award, an informal trophy passed around among local birders and given to the person who gets the first Laughing Gull of the year here. Well, we're into March now and the opportunity is still there - those dune crossovers are going to be busy the next few days... A little further afield, Clay Sutton reported a Piping Plover at Cook's Beach on 28th (funny how these early spring birds often go up the bayshore) and a Common/Eurasian Teal (I'm losing track of what I'm supposed to call it these days!) has been at the McNamara Reserve this week.

Here's some awesome photos from our stellar local birders, that have been demanding an airing for a week now: 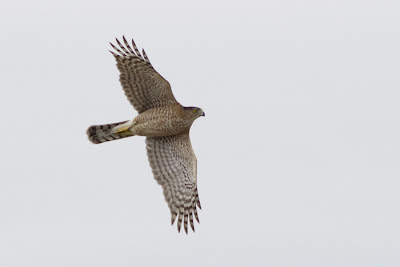 As Sam Galick entered the state park recently, all the robins on the grass shot off in a hurry; ready with his camera, Sam was able to grab this great shot of an adult Cooper's Hawk - the reason for the robins' panic! 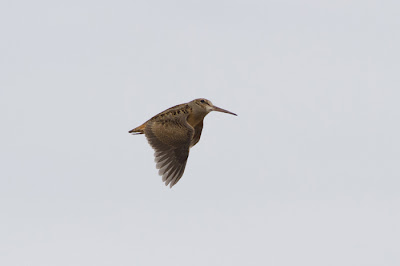 Having his camera already prepared paid huge dividends for Sam when the Cooper's Hawk flushed this American Woodcock! This is a very fast-flying species and capturing a good flight shot is usually nigh on impossible... 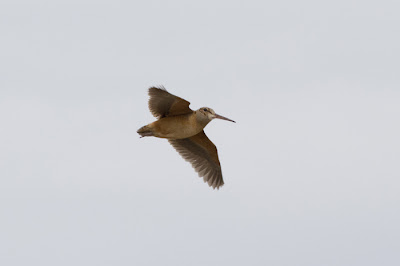 ... but seeing as this bird was fleeing from the Cooper's Hawk and not from Sam, it cut right across in front of him, instead of giving that all too familiar back end view as it disappears behind the trees [photos by Sam Galick]. 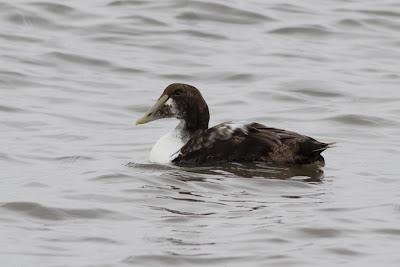 One bird that has been causing some confusion at the point lately is this immature male Common Eider which, at first glance or with a distant view, looks remarkably like our wintering King Eider. This Common Eider has been hanging out around the jetties between St Mary's and St Peter's for 10 days or so now - right where the King Eider had been before he abandoned us for the ferry terminal, and more lately the coastguard base. I heard just an hour ago that there was no sign of the King Eider at the coastguard base this morning, so it is worth keeping an eye out for it again this weekend. To avoid confusion, be sure to check the color and shape of the bill, while also noting that this Common Eider has white coming through on its back [photo by Sam Galick]. 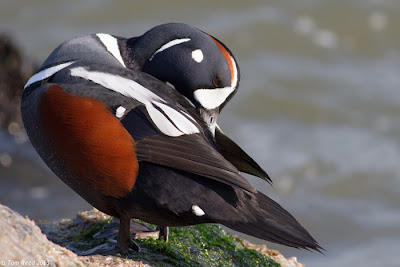 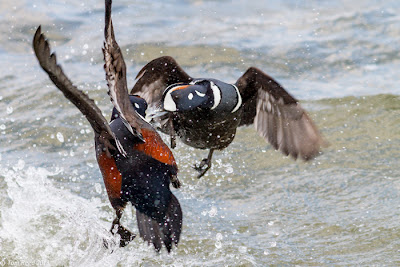 For sheer exuberance and Joie de Vivre, you really have to go some to beat Harlequin Ducks. Tom Reed sent me these two fabulous photos of this species - one a fabulous piece of composure and tranquility, the other a great action shot. Both pictures from Barnegat Light [photos by Tom Reed].
Posted by Mike Crewe at 9:54 AM