Mammals in the news

A variety of mammal species have featured in the photos that I have been sent recently, as well as in my own life and this is certainly a group of animals that tends to be a little more noticeable at this time of year. Very few mammals actually go into a full hibernation, but Woodchucks and bats are among those that do so locally and it is around now that we start to see them reappearing after their winter slumbers. Such individuals can be rather sluggish, so do keep an eye out for things inadvertently wandering out into the road; also keep an eye out for anything wandering into your yard - you might get a few surprises!

A few days ago, Karen Johnson called me to tell me that her husband, Brian, had just seen an American Red Squirrel on Jakes Landing Road. Though this is a widespread species in North America, it does not appear to be common in Cape May County and has perhaps even declined in recent years, so it is a nice animal to see in these parts and the first that Brian had seen for some years. This weekend I saw my first chipmunk of the year, busily out and about, and last week I saw a Meadow Vole scurry through the grass at Nummy's Island. Meadow Voles often live in low lying areas that can be prone to flooding so they can have a tough time of it; this species almost certainly accounted for a high percentage of the large small mammal mortalities noted along the Delaware Bay after flooding caused by Hurricane Sandy. It is as a strategy to survive such events that this species has become perhaps the most prolific mammal on earth, with captive individuals found to be capable of producing 17 litters in a year!

River Otters have been reported from Cape May Point State Park and along Reeds Beach Road this past week, so keep an eye out for them in lakes and ponds if you are out and about over the coming weeks. Finally, I had a dark, fluttery thing go past my office window today and further investigation revealed a dark species of bat which settled on nearby vegetation. A quick investigation revealed it to be one of the more easily-identified species - a Silver-haired Bat. This is a species I had not knowingly seen before, though who knows what half those silhouettes are that we see during the summer! Silver-haired Bats are widespread and common but, like most bats, not easy to observe most of the time. This individual was on the wing at 4PM so may well be another beastie coming out of hibernation for the first time and looking for a good meal to get it on the go again.

If you're looking for mammals, don't forget to keep an eye out for signs of their presence as these are much easier to find than the animals themselves; look for footprints in sand or wet mud or keep an eye out for the remains of meals - many small rodents can be tracked by the distinctive way that they open acorns and other nuts for example, while the fishy remains of an otter's last meal can also be a distinctive give away. 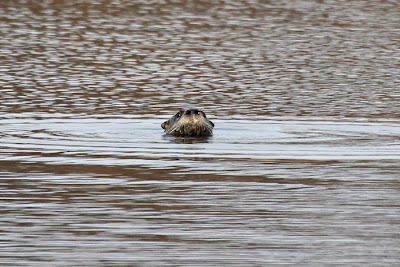 Often, all you will see of a River Otter will be a big, bewiskered head, watching you from the safety of open water. The heads of these animals are much larger and grayer than the heads of the more common Musk Rats. This individual was photographed in Lighthouse Pond recently [photo by Mike Crewe]. 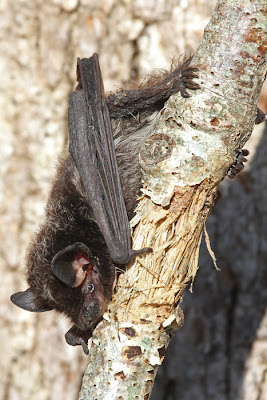 If seen well, Silver-haired Bats are readily recognized by being overall dark blackish brown. The hairs on the body are tipped whitish, giving it a frosty look and the ears have a diagnostic pale area toward the base. Like all small mammals, bats' only defence is to bite, so you should never handle them without strong leather gloves as they can occasionally carry rabies [photo by Mike Crewe]. 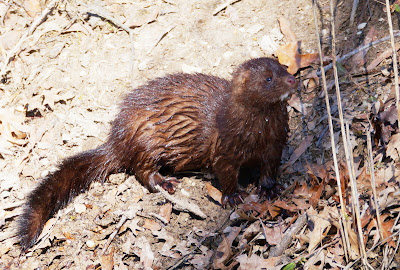 This American Mink was photographed recently in Salem County. Predatory mammals such as this tend not to hibernate, but might lie up for several days at a time if the weather turns nasty [photo by Jeff White].
Posted by Mike Crewe at 10:13 PM