There's been enough going on at the point lately that I've forgotten to say much of the back bays. On the way back from our store at Goshen (where Pat Sutton's latest gardening lecture seemed to be going down a great storm - you should give them a go!), I came back via Nummy's Island, hoping to catch the relatively high tide associated with the just waning moon. Unfortunately I was too late to catch any sparrows lurking in the roadside debris, but I did chance across some very obliging Horned Grebes. This is a species that it is not often easy to get close to, but the interesting thing I have noticed about waterbirds is they do seem to understand our limitations. If you keep calm and quiet and settle yourself down to become unthreatening to them, you can sometimes get lucky and that happened for me today. Two Horned Grebes were feeding in the tide race that was shifting quite quickly under the free bridge and I was able to settle down for a few minutes and get some quick shots. Close views give you a chance to really appreciate that extraordinarily red eye and the way they are able to keep themselves fluffed up enough to keep warm in their chilly environment. Here's a couple of today's birds... 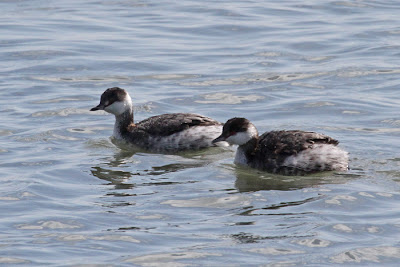 Two little penny buns bobbing on the water. Grebes trap a lot of air between their feathers and their body, which acts as insulation while they are under water - but can also making diving a little difficult as they can be too buoyant to stay under [photo by Mike Crewe]. 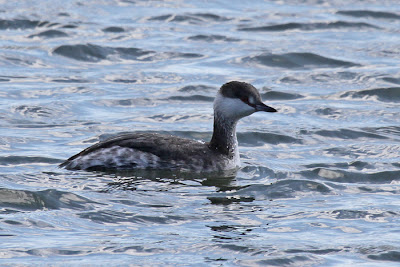 The light was unfortunately against me much of the time today, so capturing the red eye was not too easy. On this bird, note the obvious pale spot in front of the eye, the relatively stout and straight bill and the rather flattened head profile, as well as the clean white cheeks and ear coverts - all good ways to be sure it is not an Eared Grebe [photo by Mike Crewe]. 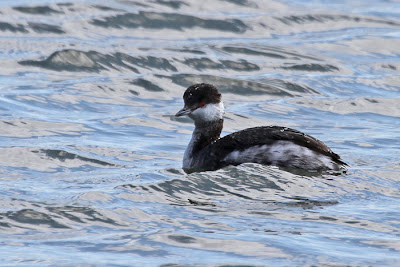 A hint of red eye can just be seen here as the bird turns his head a little [photo by Mike Crewe]. 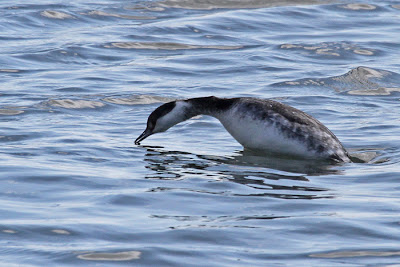 Timing is everything. I burned up a lot of pictures before I got this one - this bird is leaping up before plunging headlong into the water to hunt fish. I just caught the tip of its bill breaking the surface [photo by Mike Crewe].

Recent Sightings
A sunny, if slightly chilly, day today brought news that the drake Common and Blue-winged Teals are still present at Cape May Point State Park, while a few Red Crossbills are still to be found in the pines at the point. Keep an ear out for Rusty Blackbirds now too; there are still some in the area and they can be easier to pick out as they start to sing their squeaky songs. Check swampy Red Maple stands for them, or look for them caught up with local grackle and blackbird flocks at The Rea Farm or Cox Hall Creek WMA.
Posted by Mike Crewe at 5:55 PM