Spring can be very stressful for birdwatchers; just when you think the warm weather is breaking through, another cold front passes by and drops a little more rain on us. In many ways though, this makes spring more fun, as small pulses of migrants work their way north during the clearer spells of weather, interspersed with breaks in activity. At this time of year it is good fun to have a 'local patch' that you visit as regularly as you can and watch how migrant numbers vary from day to day - at times even hour to hour. The Western Tanager that turned up on Sunset Boulevard last week has not been reported since March 27th so it may have moved on; on the same day, I was surprised to see the Louisiana Waterthrush back on the Northwood Center Pond. Pine Warblers continue to trickle in, with one or two reported from backyard feeders at Cape May Point and numbers now building up in Belleplain State Forest. On 30th, one was feeding on the ground, right out in the middle of a farm field on Bayshore Road - migrants can turn up in strange places!

On 27th, a Glaucous Gull was reported from Bivalve in Cumberland County and numbers of shorebirds are growing on the impoundments at Heislerville. An adult Little Gull was at Miami Beach on 27th and 28th and at least one of the male Common Teals at the state park was still present on 30th. Laughing Gulls don't take long to build up in numbers once they decide to head north and, though I only had my first of the year in Cape May County on 29th, the next day I discovered that at least 2000 were at the main breeding colony near Nummy's Island. The two male Blue-winged Teal that have been wintering at the state park are not so lonely now, as small parties of this species begin to trickle thruogh our area. At least 15 can now be found around the state park/meadows area, while Ospreys have wasted no time in heading straight for their nesting platforms and many pairs are doing post-Sandy repair work now. Tom Magarian reported a migrant Little Blue Heron in Villas on 30th and Tom Reed reported a Northern Rough-winged Swallow at Stone Harbor Point the same day.

Great Cormorants have been present in good numbers this past few days, with our Friday morning Higbee Beach walk providing us with a nice party of five of these chunky birds, including three adults in full breeding plumage. The Higbee fields currently have a nice selection of Eastern Bluebirds, Eastern Phoebe (at least four on Friday), Field Sparrows, Gray Catbirds and Brown Thrashers - from now on it gradually gets better and better!! 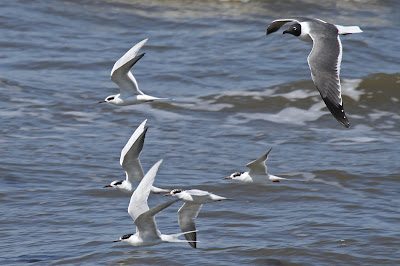 The back bays and beaches are gradually livening up as Forster's Terns and Laughing Gulls return from wintering grounds further south. Notice the variation in head molt in the Forster's Terns at this time of year - always something to be wary of when looking for something different among the commoner birds [photo by Mike Crewe]. 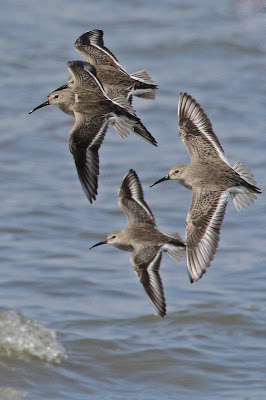 Dunlins have wintered with us in good numbers, but keep a watch on shorebird flocks from now on as birds gradually acquire their breeding plumage and become just a little bit more colorful day by day [photo by Mike Crewe]. 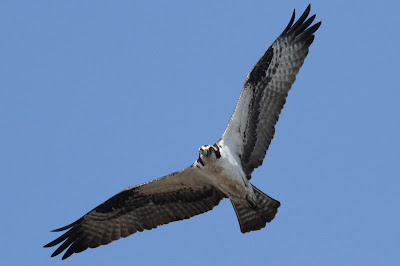 Looking right back at you! Ospreys are just impossible to ignore right now as they stock up on local fish after a long journey back to Cape May from the Caribbean or South America [photo by Mike Crewe]. 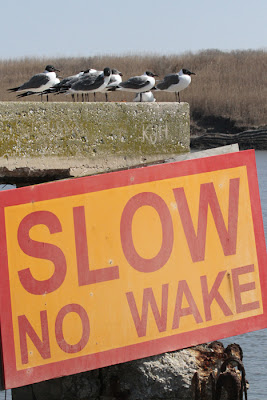 Laughing Gulls have worked hard to get back to Cape May from the Caribbean - so it's only fair that they should ask to be allowed to sleep for a little while!!! [Photo by Mike Crewe]
Posted by Mike Crewe at 10:42 PM