Taking opportunities whenever you can

Today was one of those days when it paid to be a real birding geek and make sure I always had my binoculars with me. Even on the busiest of days, a ray of light can come into your life when a chance encounter with wildlife serves as a welcome break. Traveling in to work this morning, I found myself breaking very suddenly when a large, black shape appeared in my peripheral vision to the left of the car. Right at windshield height, a Wild Turkey hurtled across the road and headed for The Beanery parking lot! This was quite a moment since this is a pretty scarce bird down here south of the Cape May canal, except for a small band of birds that hangs out along New England Road, toward Higbee Beach. My next pleasant moment came shortly after when I gave Sunset Beach a quick check from the car; here, small parties of Black and Surf Scoters were ferrying back and forth, giving a clear signal that the spring build up in the Delaware Bay was finally starting in earnest. Red-throated Loons were starting to gather too and I am sure it won't be long before the Northern Gannet show starts.

One more treat was to come to me in a fortuitous way, for my car went in for an oil change and check-up today. On the way in to pick it up lunch time, I stopped by for a quick bite at Warren Cairo's house and discovered that our local Osprey was back on its nesting platform on Cape Island Creek. See, even taking your binoculars to the garage is worth while! Actually, under the heading of 'once a naturalist, always a naturalist', I can also reveal the following. When I read through the bill to see what I was paying for at the garage, I discovered the following: "Replace air filter, cabin air filter, wiper blades, remove animal nest from engine compartment". Marvellous!

'Chaseable' birds have been a bit thin on the ground of late, which is rather more typical in spring than fall, as birds are in more of a hurry to head north to breed now than they are in the fall when they are making their way south. At least two Common Teals continue at Cape May Point State Park and at least one Golden Eagle is being reported regularly from Corbin City Impoundments. A few Black-crowned Night Herons are being reported here and there, some of which may be new arrivals, while the Tricolored Heron remains at Nummy's Island. Nummy's Island also has a nice collection of sparrows at the moment, with Nelson's, Sharp-tailed and Seaside Sparrows all lurking in cover along the road edges and a flock of 20 or so Savannah and Song Sparrows currently holds at least three 'Ipswich' Sparrows. Migrants in a hurry this week have included Tree Swallows at Tarkiln Pond on 10th (always a good place to watch this time of year), Iceland Gull and Eastern Phoebe northbound at Avalon on 11th and a Red Phalarope southbound at Avalon on 12th. I have heard through the grapevine of at least two other Laughing Gulls this week and two Snow Buntings seem to be hanging out still at South Cape May Beach, but are very elusive.

Keep your ears switched on in the evenings now, as the frog chorus is gaining volume nightly; so far, I have heard Chorus and Southern Leopard Frogs at a number of locations and the deafening madness of Spring Peepers is pretty difficult to miss now! Butterflies should be sought with the weather warming too, and there is certainly a good scattering of Mourning Cloaks on the wing now. 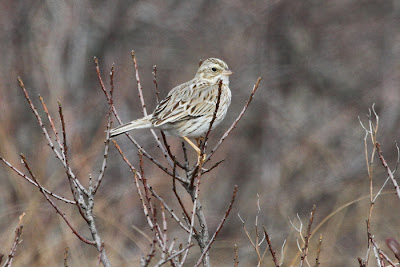 The overall pale colors of 'Ipswich' Savannah Sparrows often make them stand out more obviously when seen against a backdrop of twiggy bushes. With an estimated world population of around 6000 individuals, the total of six birds that we saw at Stone Harbor and Nummy's Island on Monday could represent 0.1% of the entire population [photo by Mike Crewe]. 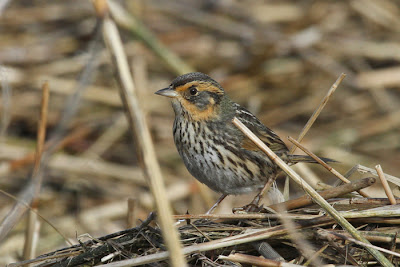 A careful, quiet approach is required to get up close and personal with any of the marsh sparrows. This Saltmarsh Sparrow shows typical heavy, dark streak on a whitish background below, contrasting orangey face and dark streaks in the supercilium [photo by Mike Crewe]. 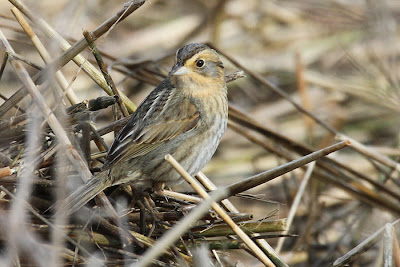 This Nelson's Sparrow was one of four with two Saltmarsh Sparrows (see photo above) on Nummy's Island on Monday. Compared to the bird above, note the paler orange face, which matches the orangey wash on the breast. Note also the more subdued streaking below and the lack of dark marks in the supercilium [photo by Mike Crewe]. 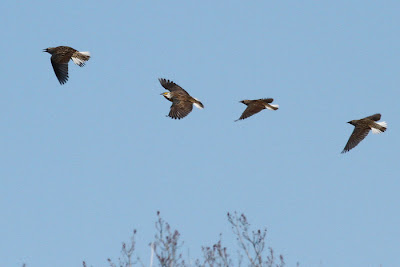 Parties of Eastern Meadowlarks are scattered in Cape May fields at the moment. These birds were part of a flock of at least 20 at The Beanery last weekend [photo by Mike Crewe]. 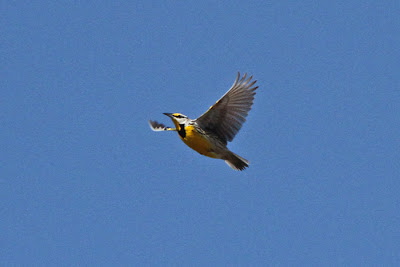 A closer look at an Eastern Meadowlark, showing its wowy yellow belly [photo by Mike Crewe]. 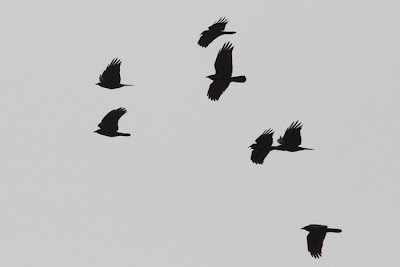 A great sign of spring that often goes un-noticed right now is the courtship flights of Fish Crows. Spread back over our area from their discreet wintering spots now, these birds present a wonderful sight as pairs and small groups perform aerial displays, where they fly around with slow, exagerated wingbeats, the pairs often mirroring each other's actions. During this behavior, I find that their profile looks much more like that of American Crow than they usually do when in typical flight, and their distinctive nasal calls are all the more useful - luckily they call a lot when courting! [Photo by Mike Crewe]. 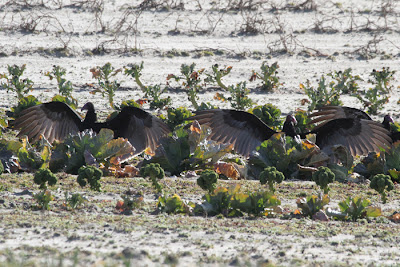 Warming up in the cabbage patch. Les Rea's crop fields provided a lovely sheltered spot for these Turkey Vultures to catch the sun this week [photo by Mike Crewe]. 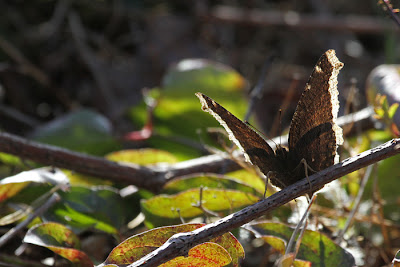 Spring, spring, spring! Mourning Cloaks over-winter as hibernating adults and are one of the first butterfly species to be seen in spring. Look out for a dark, blackish-brown butterfly with a narrow, creamy border to each wing, basking in sunny, sheltered spots [photo by Mike Crewe].
Posted by Mike Crewe at 10:42 PM