Though there was some patchy ice this morning attesting to a chilly night, sunny skies gave a fine spring feel to our first Wednesday walk at the state park for 2013. Though the ponds at the park now only hold a sparse scattering of ducks, there was nevertheless plenty to look at, with quite a few Lesser Scaup still present, a couple of female Buffleheads, four Ruddy Ducks and small numbers of most of the usual dabblers. But, though the ponds were quiet, the offshore rips were pretty busy; small parties of Black and Surf Scoters ferried back and forth and there was a steady passage of Red-throated Loons and Northern Gannets heading into the Delaware Bay. A single Horned Grebe and a couple of Common Loons also passed by and an American Oystercatcher was a nice early-season bonus. Migration was clearly in evidence too as we watched a party of 17 Great Blue Herons beat their steady way in over the water and onward behind the lighthouse. On the state park trails, signs of spring came in the appearance of three Pine Warblers, all smart yellow males and all busily feeding on insects among the Pitch Pines. Perhaps the biggest surprise was a Wild Turkey which called several times from somewhere near the park entrance. Single birds occasionally wander down to the point and are probably individuals that have been separated from the local flock during the hunting season, but it is still always a surprise to come across one down here.

Later in the day, some welcome signs of spring continued with an Osprey hunting over Lake Lily. This was shortly followed by a complete surprise for me when I found a Louisiana Waterthrush on the tiny, three-foot long pond at the front of the Northwood Center! From a quick look at the published records, this may well prove to be the earliest ever recorded in Cape May County, equalling the date of one found in Cumberland County in March 2012. You really never do know what you are going to find in the coming weeks, as birds hasten their way northward.

Recent lingerers include the male Common Teal at the state park and Tricolored Heron at Nummy's Island (both present to 16th at least), Cave Swallow at The Beanery and Orange-crowned Warbler at the state park (present to 17th and 18th respectively) and the two Eurasian Collared Doves still hanging out in the Whilldin Avenue area at the point. An American Tree Sparrow was reported from Strawberry Avenue, Bivalve (Cumberland Co.) on 17th, which is particularly notable this year as there were very few sightings at all of this species in our area this winter. Back on the 16th, Tom Reed sat out a migration vigil at the point and tallied a few inbound migrants, including 15 Wood Ducks, 24 Great Blue Herons, eight Great Egrets, 21 American Oystercatchers, one Eastern Meadowlark and four Pine Warblers. Most intriguing, perhaps, this week have been a couple of reports of Broad-winged Hawks (perhaps both relating to the same individual) from first Cape May County then Atlantic County. Though winter/early spring records of this species are not unheard of, they are still pretty rare here at this time of year, so do keep an eye on the skies! 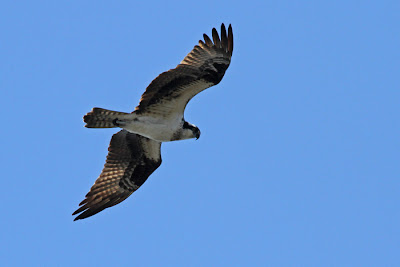 Osprey over Lake Lily today; these birds are moving up the east coast in good numbers now so keep an eye out for them on nesting platforms along the backbay marshes [photo by Mike Crewe]. 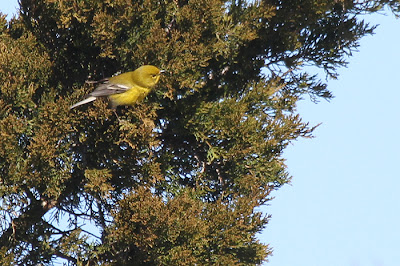 Male Pine Warbler at Cape May Point State Park - one of three seen on our regular Wednesday walk today. As with many migratory birds, males tend to arrive a little ahead of females in the spring [photo by Mike Crewe]. 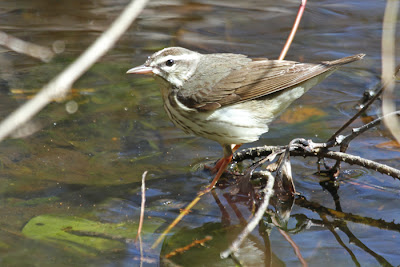 A nice bonus for my office window list - a Lousiana Waterthrush at the Northwood Center today. Compared with the more common Northern Waterthrush (around here at least!) note the heavier bill and overall colder color tones of this bird, as well as the unmarked throat and relatively sparse streaking below. This species is a much earlier migrant than Northern Waterthrush, the latter pushing much further north into boreal forests a good month or more later. Louisianas will be arriving on breeding grounds in Belleplain State Forest over the next 10 days or so [photo by Mike Crewe]. 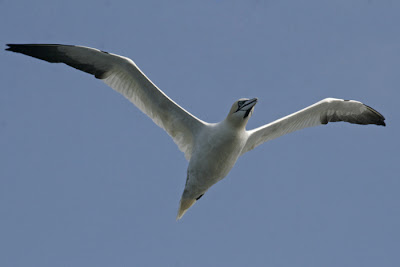 The timing couldn't be more perfect - Northern Gannets are arriving in the Delaware Bay now, just in time for our 'Poor Man's Pelagic' aboard the Cape May-Lewes Ferry this coming Saturday. Come and join us and see if we can continue our track record for some spectacular gannet and loon experiences - as well as the chance of some migration surprises. Click here for more details or call us on 609-861-0700 [photo by Mike Crewe]. 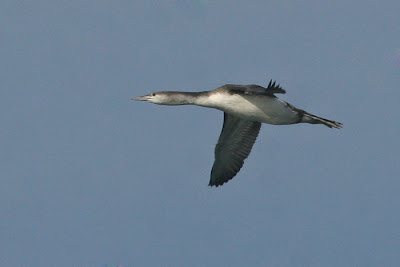 Close encounters with Red-throated Loons are often a specialty of our Poor Man's Pelagic trips across the Delaware Bay. Come with us and learn how to pick them out from Common Loons [photo by Mike Crewe].
Posted by Mike Crewe at 10:54 PM