While we all know that Cape May is the center of the universe (only kidding guys!!), there has certainly been good birding a little further afield this past week, as well as down here at the cape. Salem County has been providing some great birding along Featherbed Lane and around Mannington Marsh of late, with the resident Sandhill Cranes readily viewable in the Mannington marsh area and a Yellow-headed Blackbird along Featherbed Lane. A Ross's Goose has also been hanging out with the large Snow Goose flock in the triangle formed by Kings Highway, Haines Neck Road and Rt 540. At Parvin State Park, just west of Vineland, a male Tufted Duck has been present since 22nd with Ring-necked Ducks on Thundergust Lake, accessible off Parvin Mill Road.

Closer to home (for me anyway), the Louisiana Waterthrush continued today on the little pond at the Northwood Center, while our Wednesday morning walk provided us with four Ospreys, 10 Blue-winged Teal and the male Common Teal, still present on the North side of Lighthouse Pond West in the state park. The Northern Gannet, Red-throated Loon and scoter show continues unabated offshore - for a report on last Saturday's Poor Man's Pelagic, see Karen Johnson's piece on our Field Trips blog. A few Pine Warblers continue to move through the point and one joined the Western Tanager at a feeder at the north end of Lighthouse Avenue this morning. A scattering of Piping Plovers continue to be reported from sandy beaches, with one at Sunray Beach, Del Haven on 23rd and five at Brigantine Island on 24th (where there was also a Laughing Gull and at least 10 Willets the same day). The Tundra Swan put in another appearance at The Meadows on 22nd after a bit of an absence and two Orange-crowned Warblers continue to lurk in the state park. A Solitary Sandpiper was reported from Heislerville on 23rd. 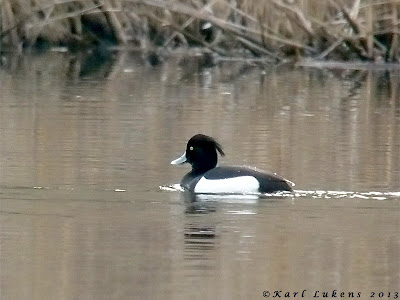 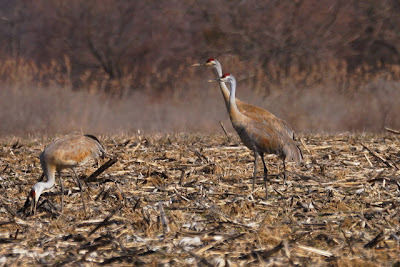 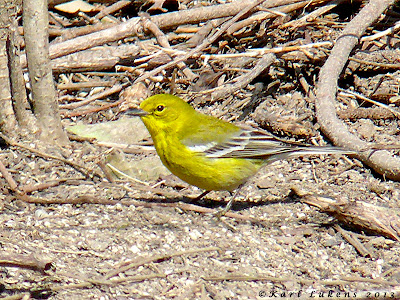 Pine Warblers are returning to our area now and many of the early birds are colorful males like this one. Keep an eye out for them at feeders over the next 10 days or so [photo by Karl Lukens]. 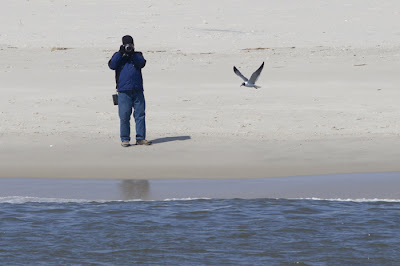 Watching you watching me... a birder gets a close encounter with his first Laughing Gull of the year. Sam Galick took this photo from the Cape May Whalewatcher as it passed Cape May Point. 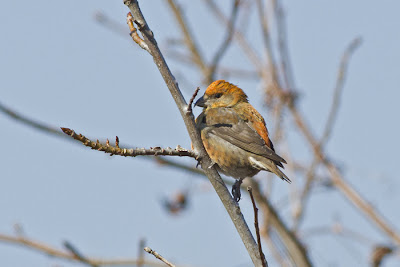 Though they hung on well into their breeding season, Red Crossbills seem to have slipped quietly away from our area and are becoming very hard to find now [photo by Sam Galick].
Posted by Mike Crewe at 3:47 PM