[This Snowy Egret graced the pool near the Wetlands Institute in Stone Harbor this morning. Click to enlarge photos.]

Karl Lukens et. al. had the Red-necked Grebe again yesterday, in Great Channel south of Stone Harbor, north of Nummy Island, but it was not there this morning, or at least Richard Crossley and I did not see it. A Pine Warbler was chipping in the shrub island at the base of the free bridge to Nummy Island, and a single Greater Yellowlegs was on Nummy Island. Flocks of Laughing Gulls soared and swam, very obviously glad to be back. 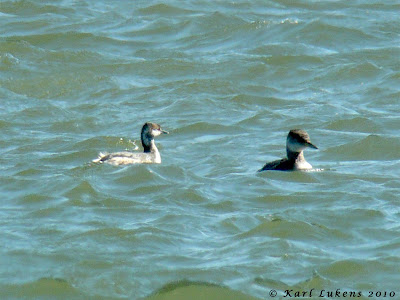 [Karl Lukens got the Red-necked next to a Horned Grebe yesterday at Great Channel. I like this photo - it shows how heavy -headed Red-neckeds look. When we were up in Newburyport this winter, where Red-neckeds are fairly easy to find, it was a simple matter to identify them even when sleeping with bill tucked, just on the size and width of their heads.]

Dave La Puma just poked his head in my office and said, "Tomorrow." I agree, the prospects are good for a nocturnal migration grounded by impending rain on Friday. Check Dave's woodcreeper web site, but, like I just told him, blame him if it doesn't happen ;>).

Please support this web site, and birds and birding in Cape May, by joining CMBO. Simply visit the membership page and scroll down for all membership options. Join by May 21 to receive the special 2010 edition of CMBO’s annual journal, the Peregrine Observer, featuring accounts and photos of the 2009 Ivory Gull; Pete Dunne's story about his return as Cape May Hawk Counter; 2009 Migration Count results; 2009 Notable Birds; and more! By the way, 60% of our members are from out of state or country. It's only $39 (ind.) and you can join online! Current members (thanks!) will automatically receive the Peregrine Observer, but please invite your friends to join!