Ferry in the Fog 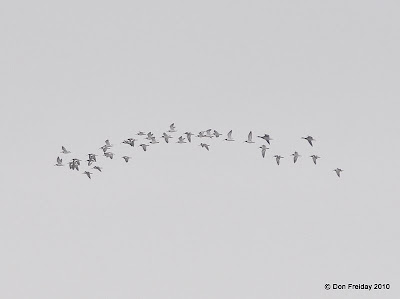 [American Oystercatchers with 2 Atlantic Brant. Tony Leukering picked this flock and its members at the start of our trip across Delaware Bay today. The direct comparison with brant reveals just how large American Oystercatchers are - AMOY are 17.5" total length, 32" wingspread, making them our largest shorebird. Click to enlarge photos.]

A foggy sail across the bay and back today on the Cape May-Lewes Ferry did not yield much in the way of alcids, nor the gannet and loon concentrations we hoped for - we being me, Tony, Warren Cairo and friend Claudia, and Kathy and Roger Horn. We did have a speck that I will persist in calling a Razorbill, though the others may call foul, plus multiple Horned Grebes, and a nice show of all three scoters, though the White-wingeds were only seen in Delaware Waters.

Only three Northern Gannets appeared. The big gannet episode of last year was March 28-29, when 50/minute or more were coming out of the bay in the fog on the 28th, and I clicked 600 from the ferry on the 29th, so perhaps a repeat ferry ride in a couple weeks is in order.

I hear via Scott Whittle that 60 Red-throated Loons were at the Concrete Ship this morning, with a large flock of American Oystercatchers. 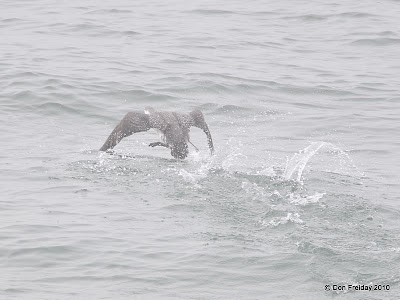 [Red-throated Loon hustling to get out of the way of the ferry.] 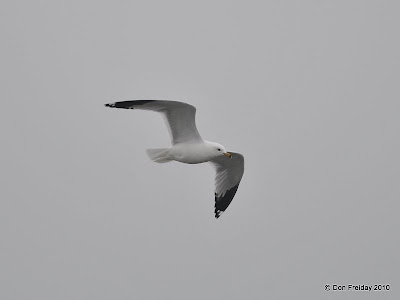 [Ring-billed Gull emerges from the fog. We often point out how Ring-billed Gulls overhead show more black in the primaries than Herring; this one has perhaps even more than usual.]