Birds Seen and Heard About 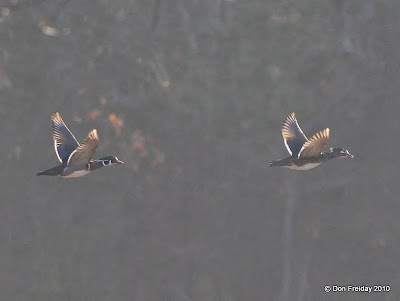 [Two of the three Wood Ducks that flew over a flooded pasture near Goshen this morning. Click to enlarge.]

Michael O'Brien refound the Eared Grebe this morning. Look towards the ocean from the north side of the toll bridge leading from North Wildwood onto Nummy Island - the bird, and several Horned Grebes, was in Hereford Inlet near where a little spit comes south off the southeast side of Nummy. Michael also had 2 Pine Warblers in Belleplain State Forest, the first report this spring, along with an Eastern Phoebe, also an arriving bird, although at least one phoebe wintered, or attempted to, on Cape Island. Tony Leukering had 2 Harlequin Ducks at Avalon, and Karen Johnson reports that Brown Creeper was singing on Jake's Landing Road, and well it should be on such a beautiful morning.

Meanwhile, back at the ranch. . .oops, back on Cape Island, it was a frog symphony last night at around 10:00 p.m., especially of Spring Peepers. This morning Bob Fogg had a Little Blue Heron on Stevens Street in the flooded winery field. That bird, according to Mike Crewe, flew north into the Beanery, where Richard Crossley reported there were 4 Blue-winged Teal.