A Beautiful Run of Weather - and Birds 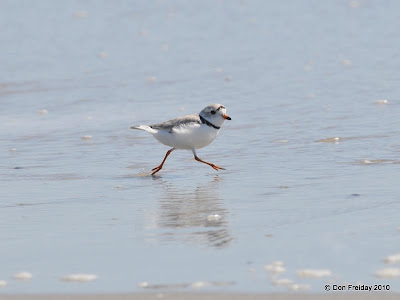 [Piping Plovers have been reported for several days now. This one was at Stone Harbor Point today. Click to enlarge photos.]

Boy, it feels good to walk around in Teva sandals and rolled-up jeans just soaking up the sun. As Dave La Puma has put it, we've got some weather on tap to put birds in the neighborhood. . .and birds are already here.

I don't think anyone relocated Bill Boyle's Red-necked Grebe from yesterday, but Bill reported that both the Little Blue Heron and Cattle Egret were at the pond at the junction of Seashore and Academy Road this morning, just north of the Cape May Canal. Tony Leukering found the 2 adult Black-headed Gulls at Miami Beach in the Villas this evening.

Results from the CMBO evening walk at the meadows on Friday and Saturday's Birding Cape May Point are up on Field Trip Reports. It's noteworthy that Karl et. al. found one of the Eurasian Wigeon on Saturday - they'll be leaving us any day. On a walk I took this afternoon at Villas WMA, only 3 American Coots, Mallards and Canada Geese graced the pond there that has held Ring-necked Ducks, wigeon, Gadwall &c.

Mike Hannisian had 4 species of butterfly today, those being Mourning Cloak, Question Mark and Comma in Belleplain State Forest and a Cabbage White in his yard. Cape May butterfly expert Will Kerling was on the beach today watching 120 Northern Gannets fly south (interesting) past Avalon.

I wandered Stone Harbor Point today, encountering many American Oystercatchers chasing about like the Keystone Cops of the beach they are, and a Piping Plover. There were plenty of Horned Grebes, a dozen or more, visible from various points on the point, and multiples of both loons, but nothing fancier. Well over 100 Laughing Gulls were around, and I was wishing I had a clicker to count all the Atlantic Brant. A Harbor Seal poked his head up amidst waves breaking over the sandbars at the tip of Stone Harbor Point, where Champagne Island, it appears, will lie beneath the waters of Hereford Inlet for another year. A few sand dunes sit like islands on the Stone Harbor Point flats, and hopefully some of the Black Skimmers and terns will be able to nest there this year.

I think my favorite bird of the day was a Mourning Dove carrying nesting material to the cedar thicket on Nummy Island. Doves are early nesters thanks to their ability to produce crop "milk," but anything nesting just makes one feel like winter has been kicked in the teeth. A nice run of weather. . . 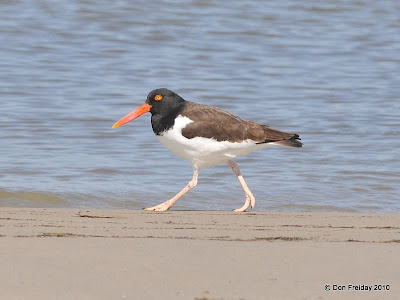 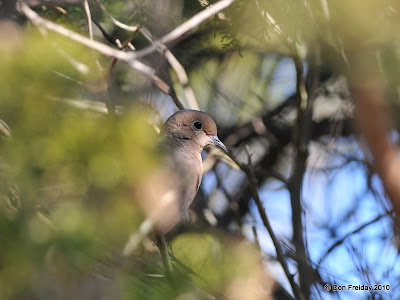 [This Mourning Dove brought nesting material into the cedar thicket south of the free bridge to Nummy Island today.]

Support this web site, and birds and birding in Cape May, by joining CMBO. Please go to the membership page and scroll down for all membership options. Join by May 21, 2010 to receive the special 2010 edition of CMBO’s annual journal, the Peregrine Observer, featuring accounts and photos of the 2009 Ivory Gull; Pete Dunne's story about his return as Cape May Hawk Counter; 2009 Migration Count results; 2009 Notable Birds; and more! 60% of our members are from out of state or country. It's only $39 (ind.) and you can join online! Current members (thanks!) will automatically receive the Peregrine Observer, but please invite your friends to join!