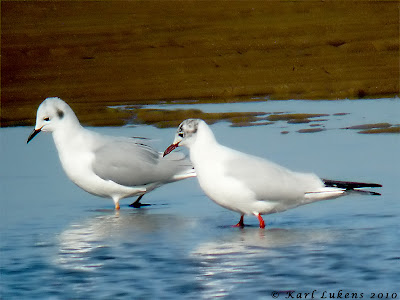 [Karl Lukens tracked down the Black-headed Gull in Villas yesterday, click to enlarge. Black-headed's supposed to average 2.5 inches greater in total length than Bonaparte's, clearly this one is a small one. The paler mantle shows well here.]

A report just came in of 5-10 Tree Swallows at Supawna Meadows NWR up in Salem County.

A lunchtime walk at Beaver Swamp yielded a female Common Goldeneye. Here's a revealing gem from Stone (1937): "Raymond Otter considers that the Whistler (Goldeneye) along with the Shelldrake (Red-breasted Merganser) are the most common of the diving ducks today." The "Whistler" is not nearly so common today.

The Bald Eagle nest at Beaver Swamp failed during the storms, but the nest itself is still there and was occupied by an eagle sitting low in it - but not an adult! The bird was positioned with only head visible, just like it was incubating, which it clearly was not, and another young eagle sat on a hummock in front of the nest.

I've been remiss in reporting non-bird critters of interest. New Jersey Chorus Frogs have been calling for several days now, e.g. at the David Douglas Park near the Ferry Terminal and Villas WMA. Their voice sounds like someone running a thumb across a comb, slowly when it's cold, faster when it's warm. Spring Peepers have been calling on Turkey Point Road. Red Bats have been out, e.g. I saw 10+ while driving from Dennisville north to Mauricetown last night. Dave Lord noted the Turkey Point butterfly on Sunday was an anglewing, probably a Eastern Comma. 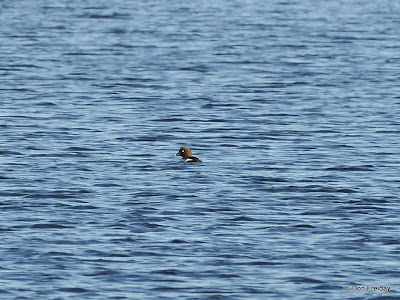