[Common Loon with Rock Crab this morning at Avalon. Click to enlarge photos.]

I spent about an hour on the 8th Street Jetty in Avalon this morning before work, mainly watching foraging loons. Common Loons eat a lot of crabs in winter - the one pictured brought three to the surface in the course of about 20 minutes, which leads one to speculate, just how many crabs are there under the waves? A dozen plus Common Loons and 3 Red-throated Loons were in view from the jetty. Let's just hypothesize that a modest average of 10 loons hang out at the mouth of Townsend's Inlet every day from November through March, and each eats a modest 5 crabs a day. That's 7500 crabs! Then what about all the Red-throated Loons, scoters, eiders, harbor seals and other crab-eaters?

Speaking of eiders, this was the first time this year I found no Common Eiders at Avalon, though I didn't bring a scope so they could have been hidden far offshore. Three male Harlequins were present, 2 adults and one immature - which, since there had been at least two immature males and one female, means at least 5 total have visited Avalon this winter. 13 Harlequins were counted by the Seawatch last fall. The scoter and Long-tailed Duck flock is diminished - I saw maybe 100 scoters and 50 Long-taileds. 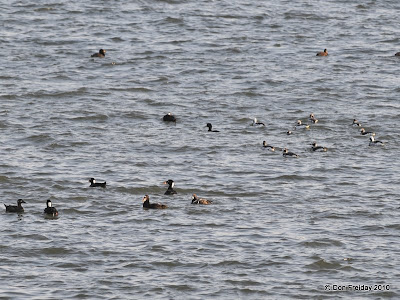 Results from this morning's CMBO Birding Cape May Point walk are up on Field Trip Reports. Eurasian Wigeon was found, but what I find more interesting is that Karl et. al. indicated that the Osprey at the end of the walk was a year bird for most people. The leaders are all active birders - but seldom leave Cape Island! Ospreys have been "in" for a while now, but normally arrive first on the Delaware Bayshore.

Please support this web site, and birds and birding in Cape May, by joining CMBO. Simply visit the membership page and scroll down for all membership options. Join by May 21 to receive the special 2010 edition of CMBO’s annual journal, the Peregrine Observer, featuring accounts and photos of the 2009 Ivory Gull; Pete Dunne's story about his return as Cape May Hawk Counter; 2009 Migration Count results; 2009 Notable Birds; and more! By the way, 60% of our members are from out of state or country. It's only $39 (ind.) and you can join online! Current members (thanks!) will automatically receive the Peregrine Observer, but please invite your friends to join!