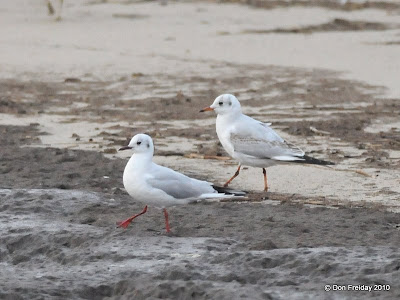 [This first cycle Black-headed Gull (right bird) joined an adult at "Miami Beach" (the end of Miami Ave in the Villas) last night at sunset. Young Bonaparte's Gulls have, among other things, all dark bills. Click to enlarge photos.]

The latest Black-headed Gull is the adult Dave LaPuma had at the mouth of Cox Hall Creek early this morning. I just showed Dave the picture above and his bird was NOT the same adult, his had much more extensive dark coming in on the head - i.e., it was the one Karl photographed, below. Two adults had been seen together. The young bird makes at least three of this species this spring. Dave and I compared his photos from a couple weeks ago of one adult with a different head pattern, but it could have molted into the pattern on the one he saw this morning.

Karl Lukens advises that the female Common Goldeneye was still at Beaver Swamp yesterday, and again had the adult Common Eider at Cape May Point. Karl also had an adult Bald Eagle at Beaver Swamp carrying sticks.

I cycled over to Nummy Island early this morning, hoping to find my first Osprey of spring. That didn't happen, but a few American Oystercatchers were there and piping like crazy, along with a Greater Yellowlegs. 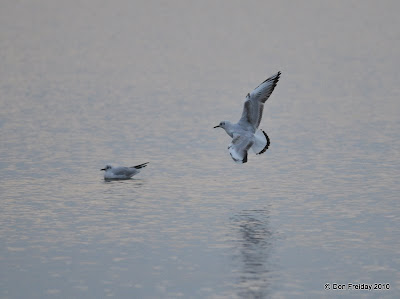 [First cycle Black-headed Gull in flight, with the adult on the water. Black-headeds in this plumage have more white on the leading edge of the upper wing than bonies, especially on the base of the primaries and the primary coverts.]