I got a new camera body recently, so tore myself away this evening from the online 40-hour HAZWOPER training with which I was enthralled for most of the day (did you hear the sarcasm?). I took a short walk out to the Villas beachfront to practice with it -- see what it could do and couldn't do with difficult lighting. It was a fun way to spend some time... that is, until the no-see-ums drove me back inside. (Note: later in the photo stint, the light was so poor, that I had to crank the ISO up to 1600 to have a chance to freeze wing motion, with the expected concomitant diminution in photo quality, as in the Laughing Gull pictures, below.)

Anywho, the Sanderlings and Semipalmated Sandpipers were enjoying a nice evening snack on the emerging (??) Horseshoe Crablets, with lots of the typical bickering among various of the Semi Sands trying to hold tiny feeding territories and chasing out intruders. 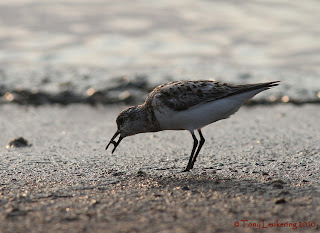 The local Ospreys continue to pull fish out of the Bay, perhaps being joined by early migrant Ospreys from farther north -- 'tis the season. 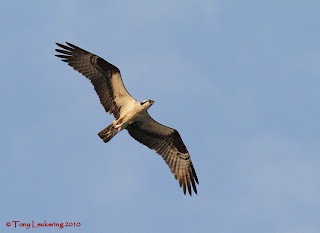 There was a very low-density southbound flight of Common Green Darners crossing in front of me from the land and heading almost due south across the Bay. 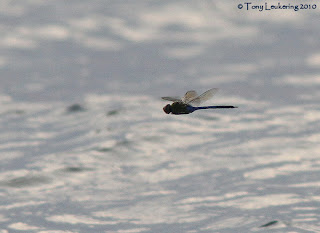 But, the highlight of the evening was the Laughing Gull squabble over an eel (I think). A white-headed individual (possibly a younger bird) was endeavoring mightily to retain the fish, while two still-black-headed birds were trying to talk it into sharing with its friends. You can see the upshot in the last picture. 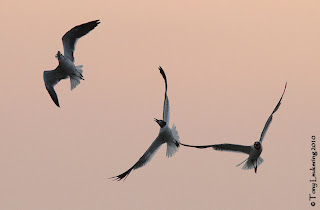 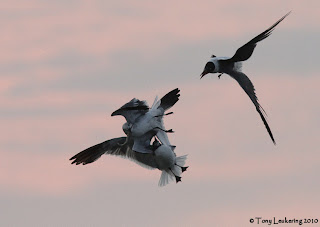 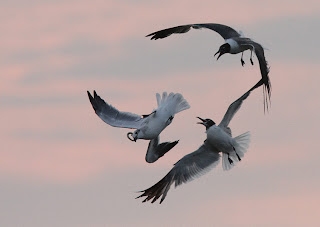 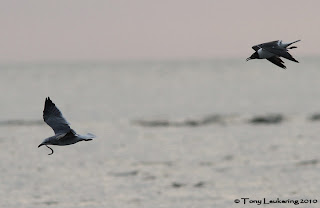 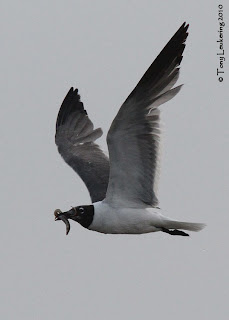