Tom Johnson reports a Lark Sparrow feeding at the dune crossover of the west path at the South Cape May Meadows, a.k.a TNC Cape May Migratory Bird Refuge, 4:18 p.m. this afternoon. 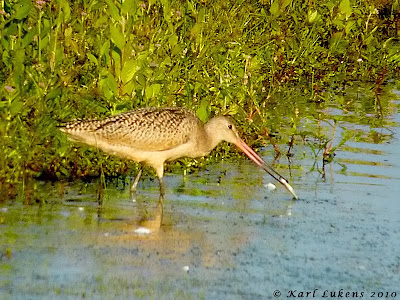 [At least somebody had a camera - today's meadows Marbled Godwit by Karl Lukens. This bird managed to disappear in the salt marsh fleabane for moments at a time - e.g. it was not visible when we first walked up. Quite a feat for a bird so tall. Click to enlarge photos.] 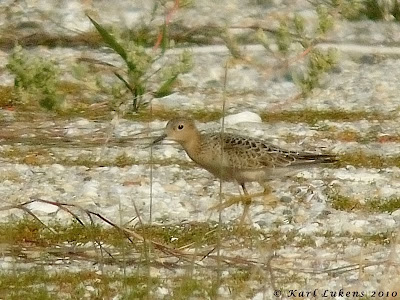 [Karl also photodocumented the Buff-breasted Sandpipers, one of which is shown here.]

The weather pattern has me wondering when the well will dry up. I was a bit taken aback by the volume of birds in Cape May today, given the flights of the previous few, and yet though tonight the winds are forecast to be very light, what wind there will be is to be west or north, and it will be clear - what for tomorrow?

Whet your appetite on the photos from Tom Johnson and Michael O'Brien on View from the Field - which will make you want to drool get a new camera, and admire the skill of the folks on the dike, and the photographers. . .
Posted by Don Freiday at 4:36 PM