[A brace of Chestnut-sided Warblers, Higbee Beach this morning. It's refreshing when morning flight birds pause for a moment. Not many warblers are as different in appearance between spring/breeding and fall plumage as Chestnut-sideds. In truth, Peterson's "confusing fall warblers" plates give the group a bad name - most are not so difficult. I often say, "Fall warblers look like spring warblers. . . only less so." Click to enlarge photos.]

"D__n you, La Puma." All in good fun, of course - just that it was 1:00 a.m. last night, I was checking my phone in the driveway after driving back from a rainy canoe camping trip on the Upper Delaware with a truckful of wet gear to unload, and Dave La Puma's text message about good flight conditions meant I'd want to be at Higbee Beach WMA in the morning, or regret not going - never mind that I'll be there tomorrow morning for the CMBO walk, too.

[Another pauser - Northern Waterthrush, I think that's La Puma's car behind it. . .]

Morning Flight Counter Tom Johnson's already got today's results up on View from the Field - it was indeed a good morning. I heard the fields were hopping, too.

At day's end I wandered over to Stone Harbor Point. There were a lot of shorebirds on the beach (and be warned, a lot of no-see-ums). The vast majority were Sanderlings, but there were 2 Red Knots, a dozen or so Western Willets, Semipalmated Sandpipers and Semi-Plovers, a couple Piping Plovers, and many gulls and terns flying in to roost. 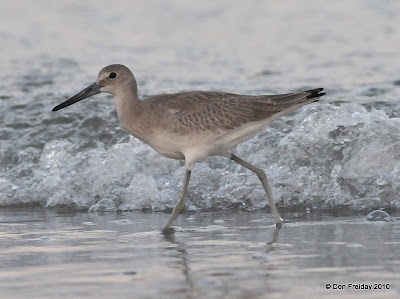 Tom Johnson sent some much appreciated updates from yesterday, since I've been away for a bit:

To which Clay Sutton added the following report from today: "We had 3 American Avocets today at the Tuckahoe WMA middle impoundment [quite the avocet year! - DF]. It is still drawn down. Looks good. 1129 total shorebirds including 3 Pectoral Sandpipers, 11 White-rumped Sandpipers, and a Long-billed Dowitcher. 5 Gull-billed Terns and 2 Caspian Terns.

"The Longport Sod Banks Black Skimmer colony was hugely successful this year. Of the 1000 + still present, it seemed that half were fledged or nearly fledged young."

Finally, a rumination on Bald Eagles. As noted, I spent the past two days paddling in the rain on the Upper Delaware River, in PA and NJ, and saw nearly as many Bald Eagles in 2 days as I saw in a week in northwestern Washington state, easily 20 different birds. Most were either adults or hatch years, evidence of local and successful nesting. When I first started canoeing this stretch, it was hit or miss whether you'd see an eagle at all - this is a population recovery not to be taken for granted.
Posted by Don Freiday at 10:10 PM