[This Barred Owl, one of a pair hooting in the wet woods along the road to the dike at Higbee Beach WMA, flew in of his own accord, to the delight of Morning Flight observers. Note the changing Wild Grape (yellow) and Virginia Creeper (red) leaves. Click to enlarge photos.]

We like to rush fall - the first southbound dowitcher in late June and fall's arrival is proclaimed. Well, that's fine, and hopeful, but southbound birds or not, June and July don't really feel like fall. There's no denying the turning season now, however.

Morning Flight at Higbee was active again, though not so much as yesterday. A Prothonotary Warbler flashed by, and there were 30 American Redstarts in the first hour for Vince Elia, who counted this morning (only 1 redstart passed the second hour). A first fall male Blackburnian Warbler, piles of Bobolinks, a decent number of Blue-gray Gnatcatchers, a few Yellow Warblers and Northern Waterthrushes, two Least Flycatchers - birds were on the move.

Richard Crossley refound one of Karl Lukens' Yellow-headed Blackbirds from last night's meadows walk this morning near Sunset Boulevard along the meadows east path. Photos of one of them, and of the walk's Sora from last night, and a full trip report, are up on field trip reports.

A fresh-plumaged adult male Dickcissel appeared in front of the hawk watch platform this morning, to the delight of the handful of birders there. One Peregrine, 3 American Kestrels, an adult Bald Eagle and a Northern Harrier were "countable" types at the state park while I was there mid-morning, typical August vanguard birds. The official hawk watch used to start August 15, but the August count can be a daunting two weeks with proportionately few birds compared to the entire season's total, so now we start September 1.

A Wilson's Snipe on the first plover pond was a bit of a surprise - though occasionally arriving as southbounds in August, this is normally a later bird. There was a report of a flyby Wilson's Phalarope at the South Cape May Meadows, where the three Black-bellied Whistling-ducks continue to perform. I had a single White-rumped Sandpiper among many flyby shorebirds at the state park this morning.

[Water levels remain high at Cape May Point State Park, and shorebirds there are mainly flybys, though there is some shoreline, particular on the plover pond bordering the South Cape May Meadows. This juvenile Short-billed Dowitcher passed this morning.] 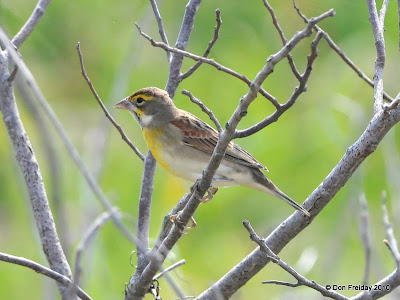 [This lovely male Dickcissel was a real treat in front of the hawk watch. The black bib is masked by yellow feather tips to those feathers, which wear to reveal the black. Michael O'Brien and I concluded on examining the photo that this is an adult male - according to Pyle, one key mark for aging males is the solid rufous median coverts, which are duller in hatch years.]

[Wilson's Snipe on the first plover pond at Cape May Point State Park this morning.]
Posted by Don Freiday at 4:02 PM