The one that got away

When visiting the dike (the impoundment berm in the NW corner of Higbees Beach SWA) to watch migrants fly by in 'morning flight,' those of us that are both birders and photographers face a conundrum: look at the bird with a binocular or try to photograph it. One can only rarely accomplish both. Those of us that have been attempting photography of small, darting things like warblers flying over the dike, usually opt for the camera. One of the reasons, and the primary one for me, is that the vast majority of such going over are of regular, even abundant, occurrence, so getting that killer shot (see previous post about Tom's Wormer pic) is more of a draw. Additionally, modern digital cameras have an advantage -- sometimes -- in the ID arena, as one can check the picture(s) afterward, something one cannot do with a binocular.

At one point this morning, Michael O'Brien opted to get a picture (note the singular article!) of a warbler going by in the neighborhood of a few Blue-gray-Gnatcatchers. Looking at the picture on the camera's LCD, he thought that it was probably an American Redstart (one of those species of abundant occurrence), despite the seemingly large amount of yellow in the wing. Looking at it on the computer, however, produced quite a different response. He sent it to me for my opinion and, amazingly, our opinions matched. First, the picture. 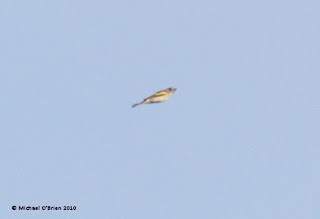 [Click the picture to see a larger version.
Those experienced at identifying warblers in flight will notice a strong resemblance to the species of the initial ID, American Redstart, with the bird's gray head, white underparts, and longish dark tail. However, the yellow in the wing is both extreme for that species and not positioned correctly. With that yellow patch, one might proceed to Chestnut-sided Warbler, but the rest of the bird doesn't look like such, particularly seeming to lack a large white eye ring. So, both Michael and I feel that the bird is either an aberrant American Redstart or a previously unknown hybrid: a Golden-winged Warbler x American Redstart.

Unfortunately, this is the only physical evidence and you could say that it lacks a little something in definitiveness. But, this is another good reminder to us, that even the most highly-skilled birders often have to let individual birds go unidentified. There are simply times when one cannot see enough, well enough, to be sure of an ID and this is certainly one of those times.
Posted by Tony Leukering at 7:57 PM