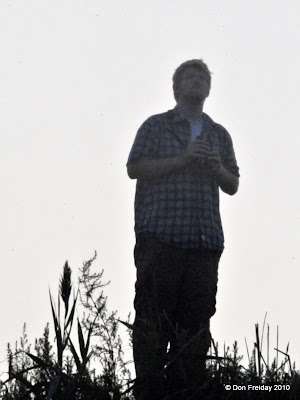 Between the Higbee Beach WMA walk (results on field trip reports), the Morning Flight count, and people wandering around generally at Higbee, a nice list of migrants was compiled. Most numerous were Eastern Kingbirds, Bobolinks, and Cedar Waxwings, all in the 100's, but there were many American Redstarts, Blue-gray gnatcatchers and Black-and-white Warblers, and enough action in general that we spent a fair bit of time in the parking lot on the walk, and most of the rest of the time in the first field. At the dike, the report from Vince Elia is that there was a steady stream of birds. "The dike" is where we conduct our morning flight count, reached by bearing right at the end of New England Road. We encourage people to view morning flight from the observation platform across from the dike; the dike itself is part of a steep dredge spoil pile that is tricky to climb. Beginning September 1, we'll have an interpretive naturalist on the dike each morning while morning flight lasts.

Scarcer species included a couple Blue-winged Warblers, along with a hybrid Brewster's Warbler, along the edge of the first field, the latter spotted by Megan Crewe. Megan, I just heard, also detected an early (all-time record early, I believe) Connecticut Warbler. We had a quick glimpse of a Prothonotary Warbler in the parking lot, which was later seen at the dike, presumably the same bird. Other warblers on the walk included Prairies, chestnut-sided, and Northern Waterthrush, to which the folks on the dike added Blackburnian, Nashville, Worm-eating, Tennessee and Black-throated Blue. Something to keep in mind if you haven't been to Higbee Beach is that birds seen "from the dike" means counted in morning flight, and for the most part seen flying past, sometimes at a distance. A few Red-breasted nuthatches were had at the dike, and Vince Elia had a couple later on in the woods. It is shaping up to be a good RBNU year.

So the weather/migration prediction proved correct. Tomorrow could be an equally interesting morning.
Posted by Don Freiday at 11:28 AM