Black Terns in the Meadows 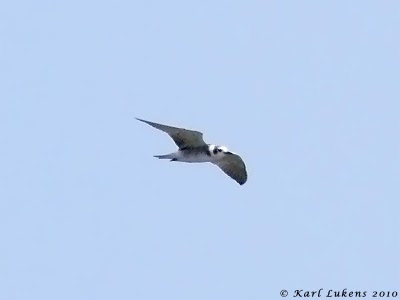 [One of three Black Terns feeding in the South Cape May Meadows this afternoon.
Photo by Karl Lukens; click to enlarge.]
Mike Crewe sent word of three Black Terns in the South Cape May Meadows shortly before 1pm today. The trio wasn't present for this morning's walk at the site, the results of which are now up on the field trip reports page. The second half of August tends to be one of the best times to find Black Terns in Cape May.

The weather continues to force us to wait for the next wave of migrants to hit the Cape, but there has been a small trickle of odds and ends, highlighted by a Cape May Warbler seen near Cape May Point today. The King Eider and Whistling-Ducks remain in their previously-mentioned locations, and a Surf Scoter continues to be seen from various locales between the State Park and Higbee's.

Farther afield, reports from Brig indicate good numbers of shorebirds, with reports of Hudsonian Godwit, Red-necked Phalarope and American Avocet, among many other species, during the past several days. 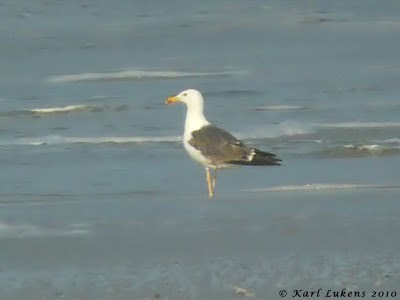 [Lesser Black-backed Gull during this morning's CMBO walk at the
South Cape May Meadows. Photo by Karl Lukens; click to enlarge.]
Posted by Tom Reed at 10:28 PM