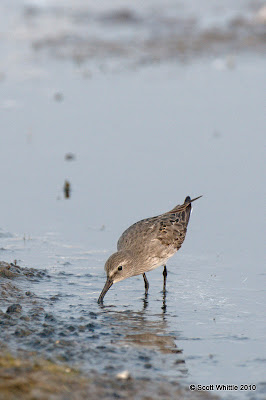 [This White-rumped Sandpiper found itself at the other end of Scott Whittle's camera during Tuesday's photo walk at the state park. Molting fall migrant White-rumpeds look hooded in dusky gray, a good character. Notice the long wing tips, too. Click to enlarge photos.]

Well, as predicted the rain - all 5.5 inches of it according to Karl Lukens' rain gauge - swelled Bunker Pond to near bank full, eliminating most of the shorebird habitat. The result was a lot of shorebirds flying around this morning, but not too many sitting for the Bird Walk for All People at Cape May Point State Park. There was one Stilt Sandpiper on Bunker Pond, and a Black Tern over it, and Bobolinks overhead almost constantly. I here there were many kingbirds and an otherwise nice selection of birds at Hidden Valley this morning, too. Results for both are up on field trip reports.

The hotline report below gives other recent highlights, including a report of Western Kingbird. The Black-bellied Whistling-ducks went missing from Lighthouse Pond but later did turn up in the South Cape May Meadows, with at least one still there (fide Tom Johnson) this afternoon.

Weather guru Dave La Puma and I agree that the forecast seems ripe for a landbird flight tonight, with a bigger one tomorrow night, or at least a more extensive one across the NE. tomorrow morning may be the better day for Cape May, since the winds will have a west component at least later tonight and early tomorrow morning. 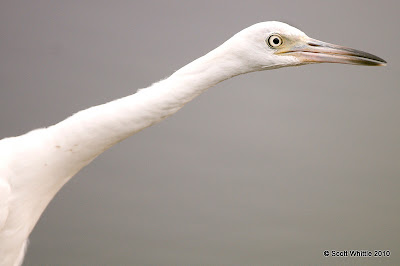 [Scott photo'd this immature Little Blue Heron on Bunker Pond Tuesday, and we were eyeing it up again this morning. Snowy Egrets can have pale on the bill base when quite young, but not pink, not usually on the upper mandible, and not showing the demarcation between light base and dark tip that becomes even more prominent as Little Blues age.]