Birds in the Rain 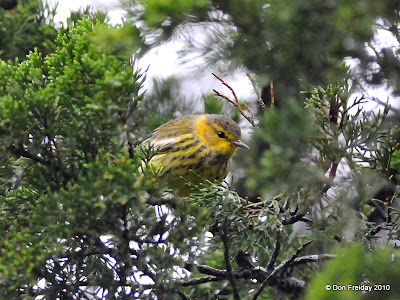 [This sodden but lovely male Cape May Warbler, outside the CMBO Northwood Center this morning (Monday) forced me to go back to the truck for my camera. This guy was one of the continuing accummulation of warblers around Lily Lake that today included many Blackpolls, Northern Parulas, Black-throated Blues, Yellow-rumps (of course), and a lingering drabbest-of-the-drab female Yellow Warblers, buff-yellow all around but with dignostic yellow tail-spots. Yellows are all but through now. If you go, please drive and park wisely, don't block traffic, and check in at Northwood for the latest sightings (and perhaps a bit of shopping). Click to enlarge photo.]

Quite the rainy day today. 75 Wilson's Snipe is the highest total  of that species I've had anywhere in a single morning, and that number of  flyby and sitting snipe contributed to a great though rainy South Cape May Meadows walk today also featuring multiple calling Soras, constant falcons, 2 adult-plumaged Lesser Black-backed Gulls on the beach, and an accretion of Black-crowned Night-herons that CMBO's counters and naturalists assessed at 92 birds from Cape May Point State Park (we counted 40 from our meadows viewpoint). The meadows walk detected 69 species in more or less constant rain.

Rain or no,  falcons passed CMBO Counter Doug Gochfeld at Cape May Point State Park as Merlins and Peregrines found a flight line between rain squalls. Doug also had a couple Hudsonian Godwits as flybys. The first Snow Geese of fall were highlights today, including a flock of 12 that displayed classic "I'm confused, there's water ahead" behavior for the meadows walk, circling several times as they decided what to do about crossing Delaware Bay in the rain. Doug had some Atlantic Brant as well.

No further word has come in on yesterday's American White Pelicans. Tom Johnson reported a good morning flight, and the Prothonotary Warbler detetected by Tom et. al at Higbee later could be a new record late date (and sets me wondering about the super-yellow bird that flashed past at the meadows today.) Doug had roughly 90 White-rumped Sandpipers pass at the state park this morning, a number that fits in with past high counts for this species, and with the rain and northeast winds diverting this species from its eventual South American destination. Richard Crossley had 300 Black-bellied Plovers plus some American Golden-plovers at the Cape May County Airport this morning. The airport is a somebody-must-check spot on east-component winds with rain, moreso at high tide, when shorebird roosting options are limited.

The funniest bird report, though, has to be the Clapper Rail observed by CMBO fall staff as it ran across the parking lot at the state park, and acting as if it wanted to get into the classroom there.

Looking ahead, it seems amazing that yet again the coming weekend seems poised for a major migration, based on the current weather forecast. Almost every weekend this fall has featured super birding, so it seems like the iconic Cape May Autumn Weekend, this year October 29-31, is lining up to be THE festival to attend this fall.
Posted by Don Freiday at 4:00 PM