One of my very favorite places phrom which to photograph is the Hawkwatch Platphorm at Cape May Point State Park. The reasons are many and varied, but include the commanding view of the sky, the variety of nearby habitats, and the camaraderie of the hawk counter, hawk watchers, and other photography aphicionados. (All right, already, enough with the 'ph' stuff!) The variety of habitats ensures a good variety of birds and the view and the numerous other birders usually present ensures that anything flying by will be seen and, thus, photo ops will be had. One of the other main reasons is that I like photographing stuff in flight.

Today (16 October) was just about a photographer's dream: lots of birds, lots of birds close, and lots of birds close and low. Though a nearly all-blue sky was the backdrop most of the day, unlike most blue-sky days, the birds did not get high and out of or nearly out of sight. That fact was due to the, one might say, 'brisk' breeze blowing all day (20-25 mph, gusts to 40 mph). This kept the raptors 'on the deck' all day. Now we get to why I noted that it was 'just about' a photographer's dream: the wind also made for erratic flight in most of the smaller species, as they responded to flying into the northwest wind and the vagaries of gusts. One might be tracking an individual bird quite nicely only to have it suddenly disappear from the viewfinder, as it rode an updraft, got sucked downward by a downdraft, or knocked to the side by a sudden gust. All in all, though, there are very few days for which I would have traded today.

Below, I present a sampling of photos that I took from the Hawkwatch Platform today, with captions providing some interesting tidbits about the picture, the bird, the species, or the event. Click on individual pictures to see larger versions. 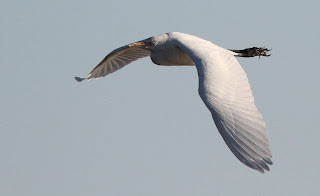 [One of the first birds to fly by upon my arrival at the platform this morning, this Cattle Egret was one of a fair few present on Cape Island today.] 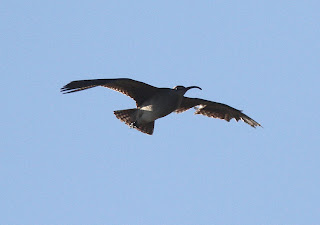 [This Whimbrel was present along the dune in the State Park for most of the day, usually at the First Plover Pond, but also in the circle with Canada Geese by the parking lot. The bird's left wing has obviously seen better days and, since the various short feathers are broken, not missing, the bird will not replace them until its next molt (assumisng that it lives that long). This could mean that, assuming survival, the poor thing may be attempting to spend the winter locally; that wing will certainly not get it to Argentina or Chile!] 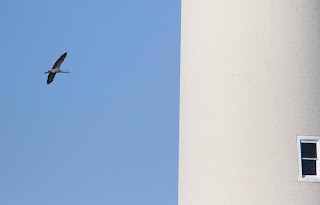 [Yesterday's Sandhill Crane stuck around for the morning, at least, being seen a few times from the platform. I managed to get the coveted 'lighthouse shot' of the bird. If one spends enough time on the platform in the vicinity of the upper-deck photographers, one will eventually hear someone shout out 'Lighthouse!' to alert the photographers that a potential 'lighthouse shot' is in the offing.] 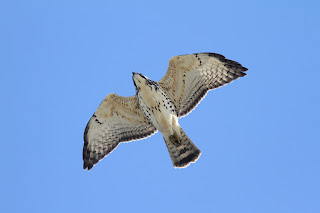 [Many of the raptors were close and low; in this case, directly overhead! (No cropping at all of this picture of a juvenile Broad-winged Hawk!) 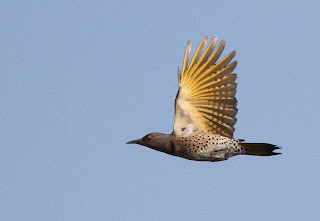 [Though this was the only Northern Flicker to fly by close to the platform, on flicker flight days (or, should I say, 'phlicker phlight days') the platform can be a good vantage from which to get in-flight flicker photos. Note that this female has its nictitating membrane (third eyelid) half-closed (or half-open if one's an optimist).]

[One of the few types of birds moving today -- other than raptors -- were Killdeers. Though we didn't see all that many, singles and small parties passed sporadically through the day, totalling some 40 or so. One of the >5000 Tree Swallows present snuck into this picture. 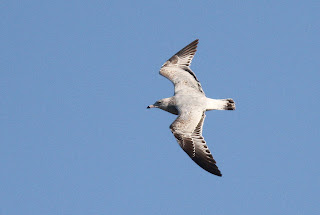 [Gulls was the other group of birds moving today, with a low-density, but steady, all-day flight of numbers of Great Black-backed Gulls and a lesser number of Ring-billed Gulls -- such as this formative-plumaged individual -- headed west and around the point. The time of year was evident in this flight, as we saw very few Laughing Gulls from the platform today, most having departed for points south. This upperside picture -- something that we photographers managed a lot of today -- was due to the gull responding to the gusty winds and having to make quick alterations of its posture and flight direction.] 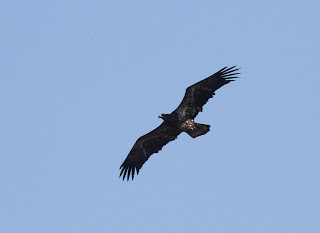 [Melissa recorded a smattering of Bald Eagles, with this individual being the most interesting, due to its age -- 2.5 years -- and the state of the process of replacement of its juvenal flight feathers. Here, we can see that it still has four juvenal secondaries on each side; they're the longer feathers in the two bunches of two per side. Though Bald Eagle ageing can be tricky, the retention of these juvenal feathers makes ageing this individual easy.] 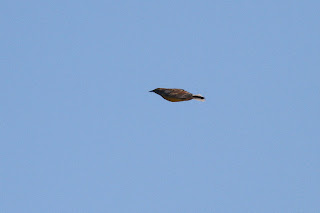 [Not the commonest sight from the platform, this meadowlark is easily identified as an Eastern by the extensive white in the tail. 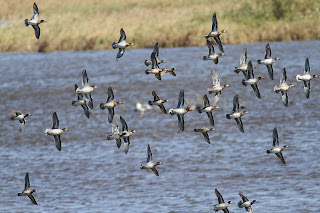 [Though ID of these teal might be thought a bit tricky by some, the distinct and thinnish white stripe on the underside of the wing makes these slam-dunk Green-winged Teal, as oppposed to Blue-wingeds with their wider patch of white.] 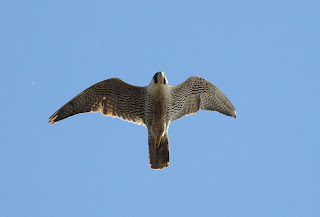 [Did I mention that many of the raptors were close and low? This adult Peregrine Falcon was certainly a crowd-pleaser!] 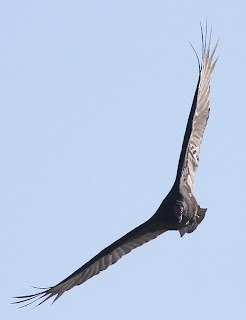 [What's a day without a picture of a Turkey Vulture? In my world, the species is one of the most photographed subjects. Why? Well, because I can -- they're big and often fly low and slow -- and because they are some of the more graceful inhabitants of Cape May's airspace. (On the ground, not so much.)] 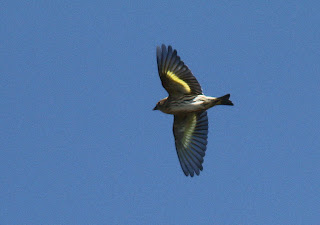 [This Pine Siskin was one of a few that passed over or by the platform in the morning. The extensive yellow in the wing suggests that it is an adult and/or a male.] 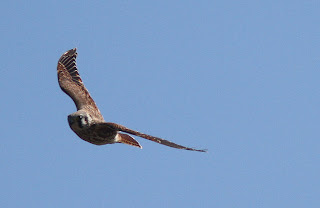 [This female American Kestrel was one of many, many small falcons that made the day's raptor flight one of the most enjoyable ones I've seen in the many years that I've planted myself on the platform.] 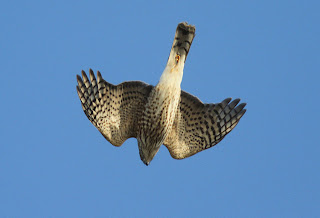 [Did I mention that many of the raptors were close and low? Small accipiters were also in abundance this day, with a number of Sharp-shinned Hawks, such as this juvenile, making dashes right over or right in front of the many hawk watchers.] 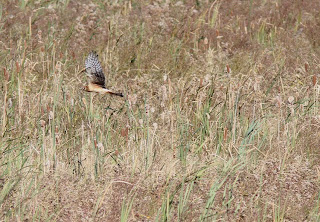 [Many a juvenile Northern Harrier (and an adult male or two) made a pass or two over the marsh on the north side of Bunker Pond.] 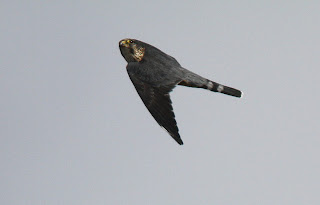 [This adult male Merlin, or Blue Jack, keeping an eye out on the other air traffic in the vicinity, was one of a large number of that age-sex class of the species spotted from the platform today. Indeed, this was another of the facets of the day's flight that made it so enjoyable: the large number and percentage of adult falcons and accipiters.] 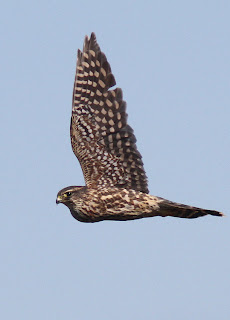 [Merlin gets two representatives in this essay's set of pictures because it's just such a..., well, is 'opposite-of-good posterior' a reasonably family-oriented term? This Merlin was one of many passing the platform today that had apparently swallowed golf balls. No, what's inside their crops (food-storage sections of bird alimentary systems) aren't white and dimply, but probably feathered. Which tends to bring up the tongue-partly-in-cheek game on the platform of 'Guess the Lump.' At this time of year, Myrtle Warbler is the most common item on the Merlin menu, mostly because of its sheer abundance. Because a lot of the Merlins passing through hunt the dunes, Palm Warbler (and it's different-tasting varities, Yellow and Western) is another item on that menu. Of additional interest to those with a fascination with molt are the two ages of feathers on the wing linings (blacker new feathers, browner old feathers) and the old outer two primaries compared to all the other primaries being new.
Posted by Tony Leukering at 8:26 PM