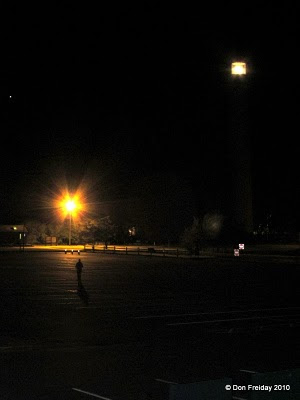 [Cape May Hawk Watch, 4:00am, 10/10/10. Photo by Don Freiday.]
For the fifth consecutive year, a crew of crazy birders assembled on the Cape May Hawk Watch to engage in one of birding's most insane activities: the Big Sit!. This year marked the 16th running of the event, a now-worldwide affair hosted by the fine folks at Bird Watcher's Digest, and originated by the New Haven Bird Club. The rules remained the same as in the past: participants select a 17' diamater circle anywhere they want, sit or stand inside of it, and find as many species as they can.
Close to 250 big sit circles were registered this year, including sites in Cambodia, South Africa and Panama! Readers of this blog will likely recall last year's Sit, when 146 species were detected from the platform on a day which will not soon be forgotten around Cape May. It was a total that would be tough to beat, but the weather forecast was lining up nicely to give us a chance to best the record.
Shortly after midnight on Big Sit Day, a meeting of the Cape May Young Birders Club (including Sam Galick, Doug Gochfeld, Tom Johnson, David La Puma and myself) convened atop the hawk watch, under the guidance of Michael O'Brien's ears. There was a decent flight occurring overhead, with a number of sparrows and Yellow-rumped Warblers making their presence known, along with the occasional thrush. A Barn Owl made a loud, close pass overhead, easily visible against the starry backdrop. It was a great start. However, by 2am, the winds had shifted to the northeast, the flight slowed, Michael had to leave, and the club was left with no guidance and few birds. By 3am, we were all huddled in our sleeping bags, watching the trailer for Richard Crossley's "Wild In The City" on Sam's iPad. 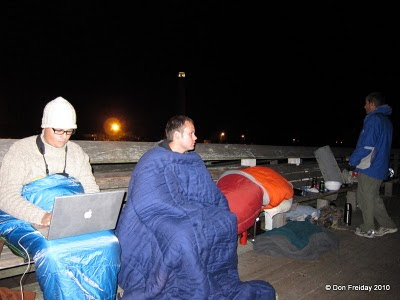 [Left to right: David La Puma, Tom Reed, Sam Galick (sleeping), Doug Gochfeld.
Photo by Don Freiday.]
Don Freiday's 4am arrival also heralded the return of birds to the big sit, highlighted by a flyover Nelson's Sparrow. Daybreak was slowly approaching, and we had tallied about 30 species by the time the first evidence of daylight appeared over the eastern horizon. Pete Dunne showed up a little before sunrise, toting donuts and coffee from Dunkin' Donuts. Want to become an instant hero? Show up with food or coffee at a big sit circle at 6am. Works every time.
The build-up to dawn really started to gain momentum, as more and more folks filled the platform, and more and more birds filled the sky. An early hawk flight was developing: Harriers in every direction, a handful of falcons, and most notably, dozens upon dozens of Sharp-shinned Hawks. Over 80 birds at a time could be found in a single scan, with most in a large cluster, milling about behind the lighthouse. It was simply awesome. As the sun rose, passerines soon followed, with an ever-widening river of Yellow-rumps, Flickers, Blue Jays and Red-winged Blackbirds taking shape overhead and back towards the west. New birds were now seemingly being called out by-the-second: "Nighthawk over the treeline", "Snipe going right", "Ring-necked Duck in the back of the pond", "Baltimore Oriole flying past".

Everything was clicking nicely. A mid-morning recap quickly assured us of at least 100 species for the day, and even more food showed up! Steve Bauer cooked us all a delicious breakfast of sausage, bacon and eggs, while Chris Hajduk arrived with a copious amount of first-rate bagels for a second straight year. The big sit is often referred to as a "tailgate party for birders" and well, it's actually true.
As the morning began to fade, so did our northerly winds. The rate of new birds had slowed exponentially. Clay Sutton picked up our Red-shouldered Hawk, while I managed distant singles of Brown Pelican and Parasitic Jaeger offshore. Glen Davis won the pick-of-the-day award after netting a pair of White-breasted Nuthatches flying over the platform. The strangest bird-related moment of the day occurred when some sort of marsh bird, likely a Moorhen, called briefly from the wet area near the southeast corner of the parking lot. However, we were never able to definitively decide what it was...so if you saw/see a Moorhen there, let us know! 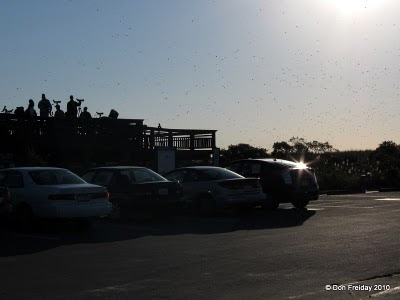 [Cape May Big Sit under a cloud of Tree Swallows. Photo by Don Freiday.]
As the noon fire whistle sounded, our total sat at 134 species. It was a stellar morning, and we once again found ourselves within striking distance of the previous mark. On the other hand, a quick glance toward the flagpoles created room for doubt, as it was now obvious that the winds had shifted to the south. The inevitable afternoon lull was on, and it would be slim pickings the rest of the way. In fact, we would go several hours without picking up a new bird.
The return of Michael, and Michael's ears, resulted in Gray Catbird and House Wren being added to the list in quick succession. In an effort to increase our visibility over the dunes, a ladder arrived on the scene around 2:30pm. Unfortunately, we soon learned that ladders apparently aren't allowed in New Jersey state parks, and were forced to abort the endeavor. Undeterred, Tom Johnson and I headed for the beach in search of Lesser Black-backed Gulls. TJ soon spotted one near the bunker, and we finally corralled it close enough to the big sit circle for the critter to make it onto the list.
The afternoon continued to drag on. We were getting tired- but we weren't done yet. Pete came through again, this time nailing Sanderling from about 34 miles away at the 2nd Ave jetty. Don helped us add Least Sandpiper, and ferocious scrutiny of the passing scoter flocks finally yielded a White-winged Scoter. Glen made a trip out to the C-View to grab some delicious wings, which were promptly gobbled up by the birders remaining on the platform. In case you didn't notice earlier, we really, really, like food. 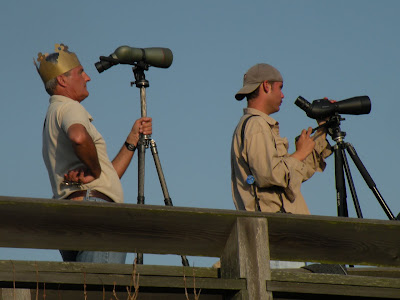 [Pete Dunne wears the infamous "big sit crown" after picking up the newest
addition to the list: Sanderling. Photo by Mark Garland.]
By now, it was starting to get late. One by one, birders gradually left the deck, and only the hardiest (craziest?) of big sitters remained as the sun dropped down along the lighthouse. Additionally, New Jersey's state bird, the mosquito, arrived in big numbers, making our last-ditch efforts even more difficult. Our total stood at 139 species; an excellent day. We wouldn't add any more species, but there was still one highlight remaining. A Peregrine Falcon had perched on the railing of the lighthouse walk-about, creating a picturesque scene in the foreground of the October evening sky. It also served as an ideal punctuation mark to the end of another classic day in Cape May.

When all was said and done, the 2010 Cape May Big Sit was certainly a success, and I think it's safe to say that a great time was had by all. Many thanks to everyone who came out to lend a hand- be it finding birds, bringing/cooking food, or just hanging out.

Let's do it again next year. 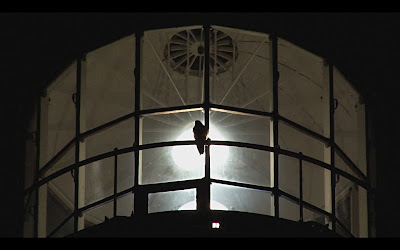 This report was generated automatically by eBird v2(http://ebird.org)
Posted by Tom Reed at 6:15 PM