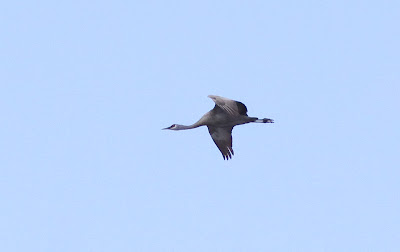 [Yesterday's Sandhill Crane at the Cape May Point State Park Hawkwatch. Photo by Michael O'Brien.]
Yesterday overall was a bit light in the bird department thanks to the high winds, but the Sandhill Crane seen from the hawkwatch and later on the beach off the meadows was a bonus, as were the two Cattle Egrets seen from Morning Flight, one of which later wound up along Bayshore Road at the Beanery and later still on the evening meadows walk. Melissa counted over 500 raptors in a low flight thanks to the high wind, and Steve had 84 Great Egrets in the last hour at the seawatch - maybe I'll take back that "light in the bird department" bit.  Again, if you haven't been keeping up with View From the Field, check it out! Migration count totals appear there, and Monarch Technician Jenny Howard's got a neat essay on Monarch biology, too, just hit the link and scroll down to find it.
Posted by Don Freiday at 5:36 AM