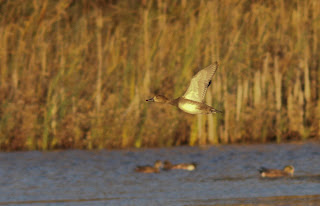 [This female Redhead was on Lighthouse Pond yesterday evening associating with a female Ring-necked Duck. In direct comparison, it was much larger and much plainer. Many inland birders are surprised to discover that, though not at all uncommon in the interior of the East, Redhead is fairly rare on the immediate coast. Photo by Tony Leukering. Click to view a larger version.]

With Don out of town for the day, I thought that I'd catch everyone up on the goings-on in Cape May the past two days. A couple things not mentioned in yesterday's blogs, Hawkwatch visitors were treated to single American Bittern and Sora flying over and landing in the marsh right in front of the platform. Unfortunately, the Sora's flight was very brief and most visitors' attentions were focused on the upper deck rather than out front at the time. Louise Zemaitis saw what may have been the same Sora make a short flight in front of the platform this morning; as yet, the American Bittern has not made an encore appearance.

Megan and Mike Crewe scored both Northern Goshawk and Golden Eagle on their West Cape May yard list today, with the former bird heading south and the latter north; Melissa Roach found and ID'ed the Golden from the Hawkwatch independently. The shorebird flight continues, albeit at very low density, past the Hawkwatch, with small flocks of Pectoral Sandpipers each of the past two days, and a small flock of Greater Yellowlegs and lots of Killdeer yesterday.

The Cave Swallow found yesterday by Tom Johnson and that was seen going past the Hawkwatch a couple times was record early by nearly a week; visiting Danes reported two fly-bys early this AM. Though not on the quality level as Cave Swallow, there was a slug of Northern Rough-wingeds at the Hawkwatch this afternoon. All locations on and off the island today reported "lots o' birds," with the stars of the show being, as yesterday, Myrtle Warblers, sparrows, and finches. Yesterday's Hawkwatch Vesper Sparrow continued this morning, as did the three immature White-crowned Sparrows there. They were joined by a fourth bird this AM, but a female Sharp-shinned Hawk took off with what might have been one of the White-crowneds late this morning. But the find of the day, today, was the two Common Redpolls at Villas W.M.A. found by Josh Nemeth, perhaps a harbinger of many more to come. Since the prognosticators-that-be correctly predicted the flights this fall of Red-breasted Nuthatch, Purple Finch, and Pine Siskin that we've been enjoying for a while also predicted a Common Redpoll flight....
Posted by Tony Leukering at 3:02 PM