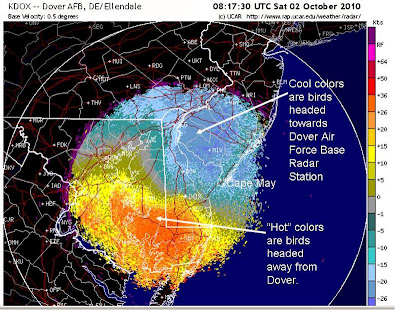 [Dover, Delaware radar, 8:17 "Zulu" time, or 4:17 a.m. EDT Saturday morning. Click to enlarge. The skies were crystal clear, except for birds. Around this time I was hearing about a flight note a minute over loud waves along Delaware Bay, while Michael O'Brien heard about 10/minute in Cape May, typical for a west wind and in general, since night listening is at its best in Cape May City most of the time. We thought at the time that most of the birds were still very high, too high to hear. Among the fliers: Blackpoll, Yellow-rumped, Palm, redstart, parula, Common Yellowthroat, Savannah and White-throated Sparrows - a lot of birds.]

Today proved to be very fine, as expected, with thousands of warblers at the Higbee Beach WMA dike, dominated by Yellow-rumpeds but about 15 species of warblers. I heard about a Palm Warbler landing on someone's shoulder, and also heard the Higbee fields were loaded with birds. Later in the day warblers congregated near the Northwood Center, including multiple Bay-breasted, Cape May, and Blackburnian.

And then there were hawks - lots of them. Peregrines didn't reach 100, but there plenty to see, along with 32 Bald Eagles at the Hawk watch, a few Red-shouldereds, and constant accipiters and small falcons, though the midday flight was high. Our group watched a Northern Harrier chase a Merlin late in the day - a reverse from the usual.

Check View from the Field for reports from the count sites, which should be up later tonight.  We're in the middle of a two-day workshop, more photos from that and thoughts about the weekend will be forthcoming.
Posted by Don Freiday at 6:51 PM