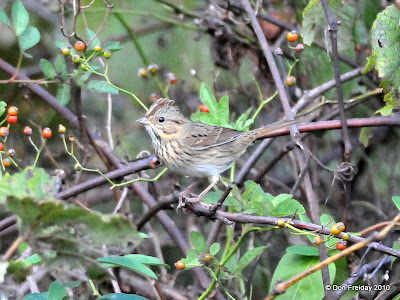 [Lincoln's Sparrow at Higbee Beach, 2nd field, today during CMBO workshop. One of 8-plus sparrows at the WMA today - other sparrow highlights included White-crowned Sparrow and good numbers of White-throated and Swamp Sparrows. Since we saw Song Sparrow, too, we swept the Melospiza genus (Swamp, Song and Lincoln's). Lincoln's is the most elegant of the three, cleanly streaked across the buffy breast, with sharply defined markings and a bit of a crest. Click to enlarge.]

The fallout, no pun intended, from yesterday's (Saturday's) flight is now up on View from the Field in the form of Tom Johnson's 12,500 bird Morning Flight count and Melissa Roach's 1227 raptor total at the hawkwatch.  Or check out Field Trip Reports from various Cape May sites - our Cape May Birding Holiday workshop had 98 species Saturday and a few additions today. We didn't see every bird well - but most, including what amounted to a 2 day raptor clinic, with hawks and falcons around whenever one wanted to look at them.

Higbee was not nearly as active today (Sunday), though the sparrows and cooperative Blue-headed Vireo and Swainson's Thrush were highlights for our workshop. The warblers (and throngs of warbler seekers) were still around the Northwood Center, including Bay-breasted, Blackpoll, Black-and-white, Cape May, Black-throated Green and Blue, Magnolia, and a Philadelphia Vireo (not all by our group). We later birded the state park and hit another pocket of warblers along the red trail, which also included a Cape May among others. 2 other Cape Mays were reported near the pavilion at the park.

My personal favorite parts of the day were, first, the predawn flight under light north winds along Delaware Bay early this morning, where a half-hour of listening produced a number of Gray-cheeked and 2 Bicknell's Thrush, with several warbler species, White-throated, Savannah and Grasshopper Sparrows, and an American Bittern.  All notes in the dark, of course - notes that can be learned, some of them anyhow, during the Advanced Birding by Ear Workshop taught by Michael O'Brien October 9-10.

More fun, or perhaps thrilling, was the Peregrine Falcon relentlessly hunting a Belted Kingfisher over Lighthouse Pond in front of our workshop group this afternoon before the rain really set in.  The kingfisher dodged five diving attempts by the Peregrine, each time smashing into the water and immediately launching in a completely different direction. Eventually the kingfisher escaped into the trees, to everyone's relief, except the Peregrine's.
Posted by Don Freiday at 4:48 PM