Impressions of a major flight

[All pictures are copyright by Tony Leukering; click on individual images to see larger versions.]

Below, I attempt a presentation of my photographic impressions of the major two-day landbird extravaganza at Cape May, 29-30 October 2010. Though I've seen larger overall numbers there -- I was fortunate to be visiting for the million-plus American Robin-and-everything-else flight in November 1999 -- I've never before seen so many birds of such a variety of species on the ground. Literally.

As I sift through my memories of what has to rank as among the best two days of birding that I have ever experienced, I find myself returning again and again to four species; four species that, for me, defined this event. While I have, perhaps, seen more individuals in a single day at Cape May for some of these four, the sheer bulk of these four species present EVERYWHERE I went was unprecedented. One of these four is, in my estimation, the iconic species of the flight.

While this was the largest hit of Swamp Sparrows that I've seen, I have previously seen something in the neighborhood of similar (fall 1991 when I was banding landbirds at Hidden Valley before it opened to the public and I and my assistant -- along with a horde of volunteers -- banded 160 Swamp Sparrows and I don't-remember-how-many-other birds in one day). Besides, I managed to get nearly zero good pictures of the species during this event, so cannot exactly wax photographically poetic with no pictures. This one was not the icon.

The number of Myrtle Warblers was astounding, though I have seen Cape Island crawling with such before (late October 1989, I think; my first fall on the Hawkwatch). This one was not the icon.

While the species was not the icon, this was, far and away, the largest hit of Eastern Phoebes that I have seen or, even, contemplated. I've never seen so many Eastern Phoebes in such small chunks of habitat getting along with each other, as they're normally quite firm about defending their personal space.

The icon? Well, I'll let that bubble for a bit as I present my promised photographic impressions of the flight. 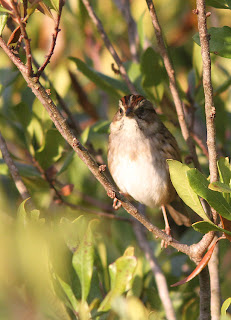 [Early Saturday morning at the hawk-trapping station at the Meadows, the blind and the soft light made for some enjoyable, but tricky, photography.] 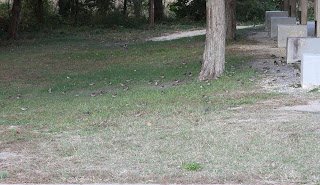 [This picture presents my one good attempt to indicate the incredibleness of this flight -- there are at least 81 Myrtle Warblers in the picture, most of which are foraging on fallen berries from the front juniper. (Picture taken by the pavilion next to the Hawkwatch on Friday evening.)] 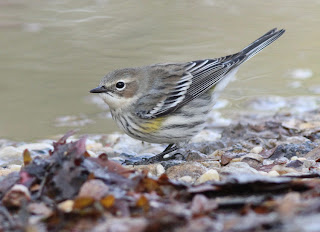 [The puddle in the parking lot at Higbees Beach SWA on Saturday evening provided some great, low-light drinking/bathing photo ops for Kevin Karlson and me. This Myrtle Warbler is just one of the birds photographed there that made this essay.] 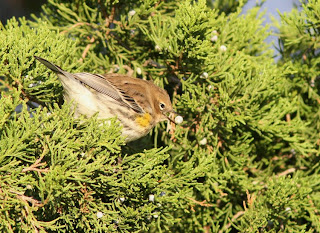 [The junipers around Cape May had been carrying good loads of fruit prior to the arrival of the umpty-gajillion birds. This picture presents one of the reasons that our wintering frugivores may find a difficult time of it this year.] 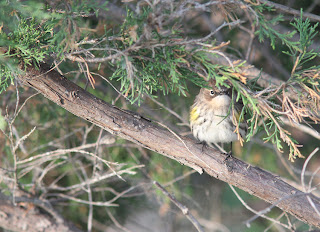 [Though most of the species presented in this essay are at least somewhat retiring, all of them were forced to spend considerable portions of the day out in the open and in close proximity not only to each other, but to the hordes of those crazy bird-watchers. This Myrtle Warbler was, perhaps, a bit more typical.] 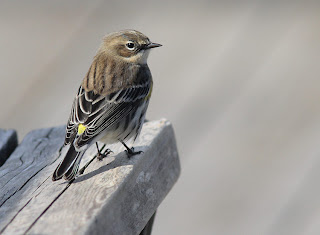 [This one was not, being perched on the bench on the upper deck of the Hawkwatch platform Friday afternoon and mingling with some 12-15 hawkwatchers.] 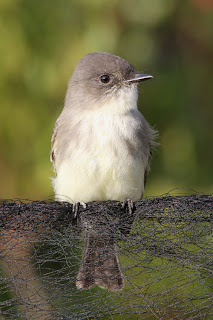 [Most of the hawk trappers kept their mist nets closed during this event, in order to not have to spend their days extracting songbirds, rather than raptors. These furled mist nets provided additional perch sites for a variety of species, including 2-3 Eastern Phoebes at the Meadows trapping station. 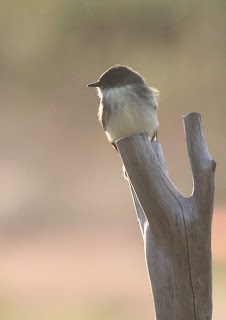 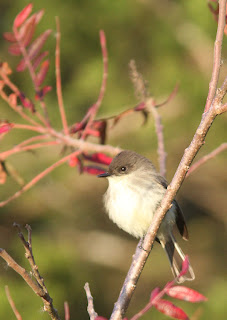 [Two more examples of the usefulness of trapping blinds for uses other than hawk-trapping -- the birds are close and mostly unaware of one's presence!] 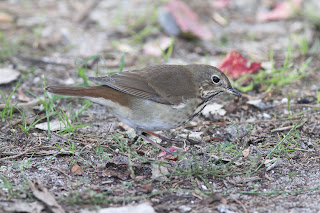 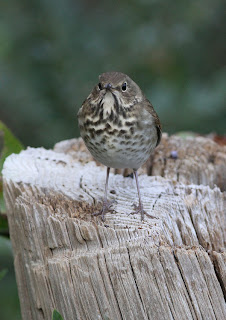 [Ah, the icon. While I have seen a lot of Hermit Thrushes in my life, the numbers that I heard and/or saw in the past two days may come close to equalling my previous lifetime's total! How many were on Cape Island may be a matter for discussion among the regulars for years to come, but it was certainly in the thousands, perhaps in the tens of thousands. Simply spectacular!] 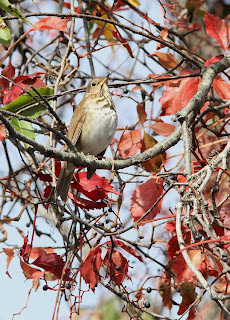 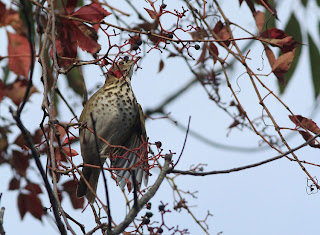 [Virginia Creeper, with its lovely red fall foliage provides great counterpoint in fall bird photographs. The Hermit Thrushes may not have appreciated the visual impact that the plant's leaves make, but they certainly appreciated the plant's abundant purple fruits! As with the juniper-berry crop, the loss of the lion's share of the Virginia Creeper crop (among virtually all the other fruit-providing plants on Cape Island) may mean for lean times for wintering frugivores (e.g., American Robins and the three mimids: Gray Catbird, Northern Mockingbird, and Brown Thrasher). Which brings up a somwhat-tangential thought: In such a huge flight of mid- to late-fall landbird migrants -- which typically is comprised of a lot of species of berry-eaters -- I neither saw nor heard a Cedar Waxwing. Odd.] 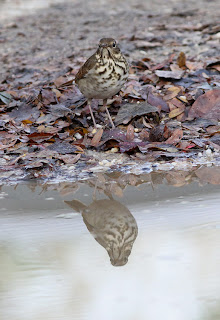 [Now, it's high time that I got to sleep, so that I can get up before the sun yet again to go out and ogle those wonderful biological constructs called birds.]
Posted by Tony Leukering at 12:20 AM