Well, I hate to say I told you so but, I told you so!! Another day without a cold front, but what a day it turned out to be. Regular visitor from the UK, Jonathan Wasse arrived here yesterday and headed to Higbee's Beach for his first morning of birding, only to discover a Black-throated Gray Warbler! This is a species that should be far away in the Rockies and a wonderful find for Jonathan. Luckily for the rest of us, the bird hung around and was watched on and off over the next couple of hours by a good number of admirers. Other far-western birds of late in New Jersey have included a Townsend's Warbler at Sandy Hook and a Say's Phoebe at Bee Meadow, Hanover. 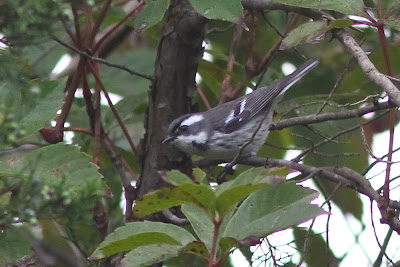 Black-throated Gray Warbler at Higbee's Beach today. The bird mostly favored junipers (red cedars) along the main track that runs south from the portaloo area. [Photo by Michael O'Brien]
Yesterday, our regular Wednesday morning walk at the state park turned up two American Moorhens - now split from Common Moorhen by some. Unfortunately, some people have chosen to now call the New World bird a Common Gallinule (gallinules are of course in the genus Porphyrula) which is confusing many people and resulting in erroneous records of Purple Gallinule. If only some of the people who make these name-changing decisions for personal reasons could remember that the world doesn't just center around them! Tom Magarian was counter at the Avalon Seawatch on Wednesday and noted a Bridled Tern heading south.

Back to the birdshow at Higbee's Beach this morning; as well as the aforementioned Black-throated Gray Warbler, a Clay-colored Sparrow was found by visiting birder James Smith (sorry guys, another Brit - though like me, he does at least live over here!) in the first field, while yesterday's Upland Sandpiper remained faithful to it's little corner there too. Otherwise, there wasn't much sign of common birds as such, though there was good numbers of Gray Catbirds and Brown Thrashers calling from vine tangles. Lunchtime, there was a report of American Avocet and American Golden Plover on the Avalon side of Townsend's Inlet, then the afternoon belonged to the Hawkwatch, as an almost continuous stream of Peregrines cruised south before a greatly appreciative audience. As yesterday, American Kestrels and Merlins featured heavily too. Ospreys, Northern Harriers, Sharp-shinned and Cooper's Hawks and a smattering of Bald Eagles all kept folks on the edge of their seats, while out in The Rips, at least five Parasitic Jaegers were persuing gulls and terns and there was at least two reports of a dark Pomarine Jaeger out there. Tomorrow might be touch and go, but Saturday is looking interesting weather-wise - we might get that long-awaited North-westerly after all...
Posted by Mike Crewe at 5:51 PM