Lackluster - but with a bit of polish...

Soggy weather continues on and off at Cape May today as dreary southerlies slip through the region and persuade migrants to head south by another route. However, such laclustre days always have a little bit of polish on them here and, though some of use such days to catch up on office duties, others are out and about and it is such people who turn up the extra special goodies that are lurking around Cape May at this time of year. Over the last few days, I've been sent several photos of such birds and even managed to see a couple of things myself!

Perhaps one of the most bizarre text messages of late came early on Wednesday morning when Tom Johnson reported two Wild Turkeys, seen in flight from Higbee's Dike! A leucistic Laughing Gull also comes in under the bizarre header - one has been reoprted a couple of times from around the point, most recently at St Mary's on Wednesday. Further afield, Brigantine continues to pull in both birds and birders to watch them, with White Ibis, Hudsonian Godwit and Yellow-headed Blackbird all still being reported this week. Below are a few photos of some interesing birds from the past few days. 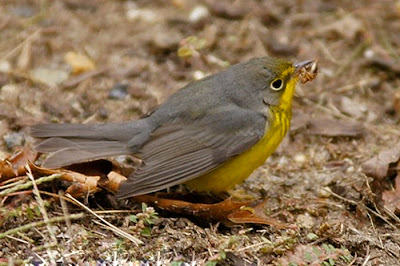 Wayne Morley sent me this unusual photo of a Canada Warbler; unusual because this is a bird that normally likes to skulk in the thickets. This bird was on the ground under Wayne's feeder in his yard - very nice! 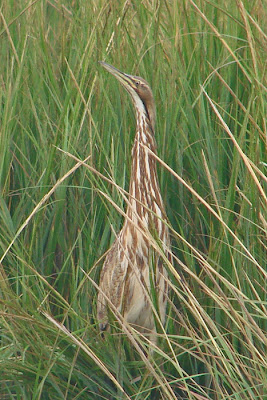 And talking of things coming out into the open; Bob Lubberman sent me this picture of a fabulous American Bittern that disported itself before the folks on our Back Bay Birding By Boat trip today. 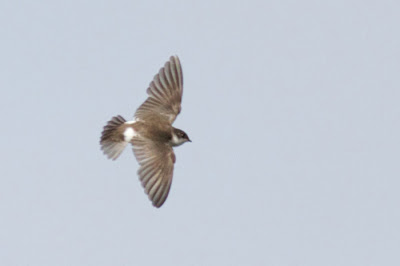 Tom Johnson was out on the dune cross-over at South Cape May Beach, late Monday afternoon and chanced across the third Violet-green Swallow to be recorded in Cape May - a stunning find. Though there have been no further reports of the bird as yet, as long as conditions remain non-conducive to migration, there is a chance that it may still be in the area. Tom's comments on this bird can be found on our View From The Field page. [Photo by Tom Johnson] 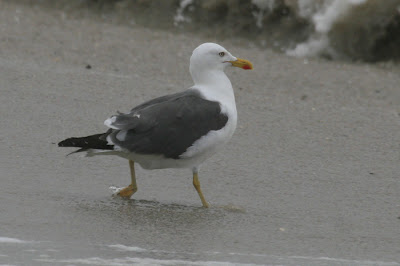 This adult Lesser Black-backed Gull has been hanging out on the South Cape May Beach recently and strikes me as a little odd, as I would normally expect such a bird to be starting to molt into non-breeding plumage by now. Yet this bird sports a clean white head and very bright bare parts (bill and legs) which would be more typical of a bird still in the midst of breeding. [Photo by Mike Crewe] 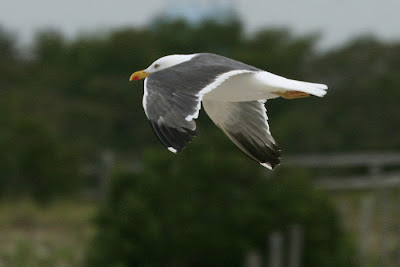 Another view of the same Lesser Black-backed Gull. The strong contrast between the black wing tip and dark slate-gray upperwing shows this to be of the race graellsii, the most westerly race of this species and thus the one typically found in North America. Gull afficianados may well spot that the 5th primary appears to be growing in on the left wing here, but my photos show no matching molt on the right wing so this may just be replacement of a lost feather. [Photo by Mike Crewe] 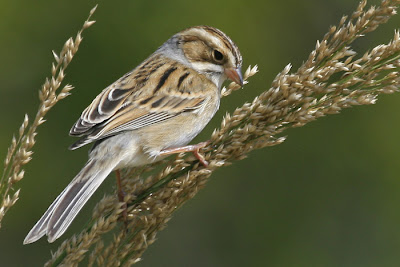 Another bird that poses an interesting question. This Clay-colored Sparrow was present beside Bunker Pond today, just west of the railing where the terns sit. It posed nicely for me and looks wonderfully like a Pallas's Bunting here!! [Photo by Mike Crewe] 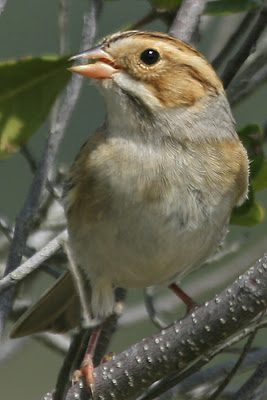 This picture of the Clay-colored Sparrow shows nicely the pale lores which separates this species from Chipping Sparrow, the latter showing a clear dark line between the bill and the eye. [Photo by Mike Crewe] 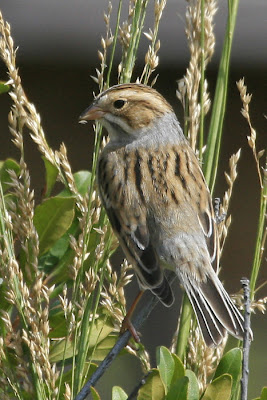 So, my interesting question about this bird - which Michael O'Brien first raised after the briefest of glimpses of the bird on the back of my camera (all the more reason to go on his Sparrows workshop in October!) - is this. Clay-colored is supposed to have a light brown rump, concolorous with the rest of the upperparts, while Chipping has a light gray rump, contrasting with the rest of the upperparts. So what is going on with this bird?!! [Photo by Mike Crewe]
Posted by Mike Crewe at 5:44 PM