"There's a Parula in my Christmas Tree..."

Another Cape May Fall Saturday; a crowded Higbee's Beach parking lot, lots of smiling faces and wall to wall birds. What more could you want? Despite some miserable weather today, with cloudy conditions turning to rain in the afternoon, everyone I spoke to today was having a great day. And the reason? Well, there was a nice continuation of yesterday going on, with warblers all over the place and a nice collection of other goodies too. Higbee's was alive with Northern Parulas, American Redstarts and Red-eyed Vireos today, as well as some nice bonus birds, which included at least 10 Rose-breasted Grosbeaks, five Scarlet Tanagers and both Yellow-billed and Black-billed Cuckoos. Up at Del Haven, a wander of the local streets provided an adult male Hooded Warbler. I heard today of another one of those at the Northwood Center yesterday, so that makes 29 species of warbler for Friday now. Particularly noteworthy today were the vireos, especially Philadelphia Vireo. My own personal tally included Philadelphia, Red-eyed, White-eyed, Blue-headed and Warbling Vireos today - making six species seen in the last two days if you add in Friday's Yellow-throated Vireo! Gorgeous Black-throated Blue  and Black-throated Green Warblers and more subtle, fall-plumaged Cape May, Blackburnian, Blackpoll and Bay-breasted Warblers were all enjoyed by many today. More unusual birds during the day included a Lark Sparrow at Cape May Point State Park and a Red-necked Phalarope seen briefly on South Cape May Beach with Sanderlings. There was also a juvenile Red Knot there - not a common bird south of the canal. Offshore, The Rips were "heaving" according to Tony Leukering and several Parasitic Jaegers and Brown Pelicans were noted.

All in all, another fabulous Cape May day, but what of the title to this post? Well, some of us locals donate our old christmas trees to the Sunset Grill to help protect it from coastal erosion - and we certainly want to save our favorite breakfast stop from falling into the water (and we're ever grateful to them for allowing birders to record avian events from there during the passing of Hurricane Irene recently). So there was I, having a late breakfast before work this morning, when I saw a little moss-green, blue and yellow sprite moving amongst the branches of our old tree, right down on the edge of the beach itself. And there it was, in all its glory; I turned to Brian and said... 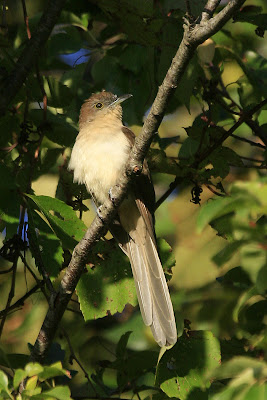 Black-billed Cuckoo at Higbee's Beach today. Many members of the cuckoo family having energy-saving thermoregulatory behavior and often lose heat overnight. This often means that, after a cool night, they will sit up in the sun to warm up before going about their day's business. We can use this behavior to our advantage by looking for cuckoos early in the morning wherever there are sheltered, sunny spots with exposed branches [photo by Mike Crewe]. 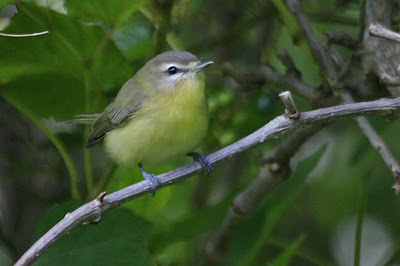 It was a great day for Philadelphia Vireos today [photo by Mike Crewe]. 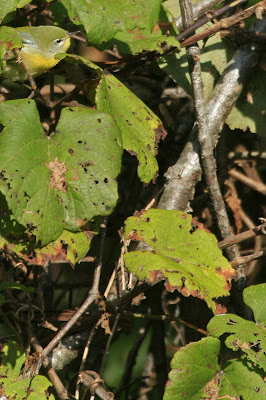 Peeping Parula. It was a fabulous day for watching Northern Parulas today and this picture sums the species up for me - a little gem of a bird that actively peeps around the leaves, looking for tasty insects [photo by Mike Crewe].
Posted by Mike Crewe at 10:14 PM