[All pictures are copyright Tony Leukering 2011. Click on image(s) to see larger version(s).]

One of the stories of the day was the fog. With air temperatures staying fairly stable and high (upper 60s to mid-70s) for what seems like forever (but is only the past week) and with water temperatures having dropped (now in the mid-60s), mostly cloudy to overcast skies, and little to no wind, visibility has been poor to nearly non-existent for the past 40 hours or so. Yesterday's hawk flight was very surprising in its strength -- surprising due to the lack of any appreciable change in macro-scale weather conditions, with large numbers of accipiters and falcons, but Melissa Roach was more than happy to have something to count for a change. Though I haven't heard many details, today's hawk count was considerably slower, though with a good afternoon falcon flight. However, Tom Reed up at the Avalon Seawatch had an abysmal day, with visibility less than a quarter-mile for much of the day and few birds noted during the many, but brief, periods of greater visibility (but with visibility beyond the bell buoy being particularly scarce). However, among his skinny number of birds counted as migrating were four Brown Pelicans (more if any passed after I left).

The bird of the day was again the Wilson's Plover that has been a Will-o'-the-wisp for about 10 days, now, at Stone Harbor Point, though we may have figured out why that was so (see below). Vince Elia reported it this morning around 8:45 from farther south on the Point than previous locations. I got the message and, since two trips there on Saturday did not produce a sighting for me, I promptly headed out there. I was greeted there by visibility of less than a few hundred meters, but headed south from the parking lot, anyway. Along the way, a Northern Waterthrush objected to my disturbing it on the path, flying around me and back into the shrubbery. 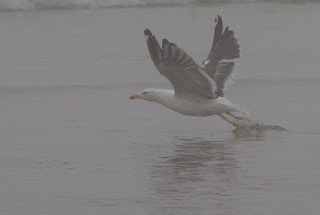 Another Lesser Black-backed Gull, this one a second-cycle bird (~1.25 yrs. old), was a bit farther down the beach on my way south. 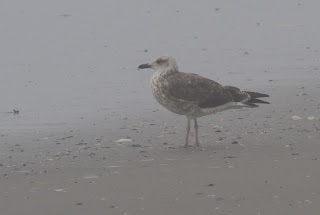 About halfway down the point, but looking back to the north, I saw the following scene: 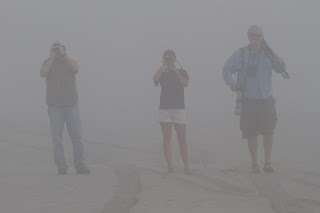 Michael O'Brien, Melissa Roach, and Tom Johnson were on my trail, though only barely identifiable a few hundred meters away. I waited for them to join me, and we continued our tramp downbeach. Only a short while later, Michael found the Wilson's Plover running across our path, whereupon we all ogled it and then moved closer in hopes of better looks and some photographs. Unfortunately, it then flew off to join a passing flock of Sanderling that was heading south and then west into Hereford Inlet. 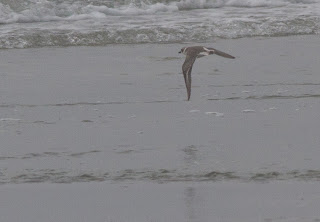 [Wilson's Plover shortly after jumping off the beach on its way to join a passing Sanderling flock. 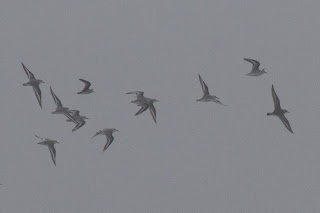 [Wilson's Plover with part of the flock of Sanderlings and a Semipalmated Sandpiper.]

We continued to the end of the point, where we noted that much of Champagne Island was above water and we speculated that the Wilson's Plover might have been so difficult to find because it spent some of its day on the island. Though the island has supported a large tern and skimmer colony in the past (and been much ogled because of it), its current iteration has no vegetation because it is entirely under water at high tide. Because of that, I believe that few birders have scanned it much in the past couple years and we might have gotten out of the habit of thinking about it. But, as noted by Michael (again!), there was the plover! Unfortunately, again the bird flew off and we lost it to the SE in the fog. However, we still enjoyed the large number of Caspian Terns and Black-bellied Plovers there, along with a smattering of Red Knots and American Oystercatchers, and three adult Lesser Black-backed Gulls. 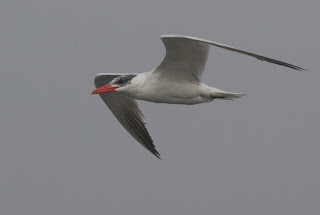 [One of some 40 Caspian Terns on Champagne Island and the tip of Stone Harbor Point.]
Posted by Tony Leukering at 5:21 PM