A Wilson's Plover was found at Stone Harbor Point by Don Freiday this morning, just south of the southernmost stone jetties. Though there is fairly regular coverage at this site, it does seem likely that this is the same bird that was reported from there on Sunday, September 11th. I managed to squeeze the bird into a lunch time visit and found Don revelling in some glorious sand and mud as he defied the incoming tide to get some great shots (being in my work apparel, I decided to be a little more cautious with my approach!). The bird was flushed by a shell collector (despite the gathering of people enjoying the bird!!) and flew off strongly to the south, but it may well still be in the area and should be looked for along the tideline.

Though I didn't make it to Higbee's Beach before work this morning, there may well have been a small movement of birds, as the Northwood Center certainly had warblers first thing, including a Yellow-breasted Chat right outside my office window (a new one for that list!) and some visiting birders reported a Mourning Warbler beside Lake Lily, outside the store. This morning I also heard of a Bonaparte's Gull seen yesterday too.

Along the Atlantic coast this morning, Brian Johnson reported a fair movement of Brown Pelicans heading south off Sea Isle City, while our Seawatch counter, Tom Reed, had counted 32 passing Avalon by lunchtime. Oh, and by the way, if you want to know how Tom is doing with his New Jersey 'Big Year' - take a look at the Press of Atlantic City website where he's front page news right now! 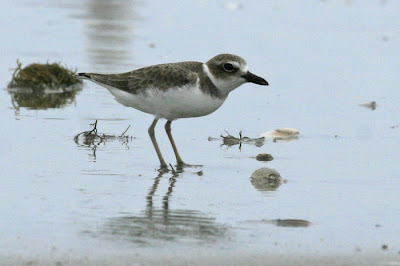 Wilson's Plover at Stone Harbor Point today - note the chunky bill designed for catching small crabs, which is a key feature of the species. This bird is dear to the hearts of Cape May birders, since the species was described from one which was shot on the beach at Cape May by Alexander Wilson on May 13th 1813 - one of three that he bagged that day! [photo by Mike Crewe] 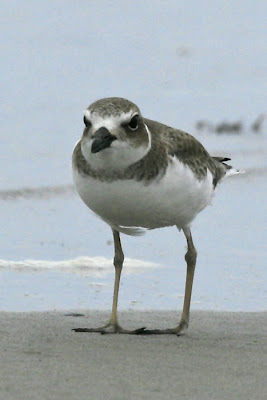 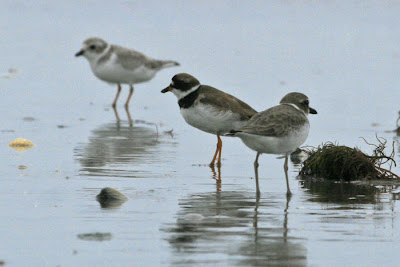 Three in one view! Three Charadrius plover species in one shot is not easy in Cape May County, but here, Piping, Semipalmated and Wilson's Plovers all line up to be counted at Stone Harbor Point [photo by Mike Crewe].
Posted by Mike Crewe at 2:33 PM