There was a huge buzz around Cape May today. At last, those annoying southerly winds were swept aside by a swing to the north and the World famous Cape May bird machine was out of the station and rolling down the line. And what a buzz it's been today! It seems that everyone has great stories today, wherever they went birding. It started with the insomniac Tom Johnson alerting us to a wealth of overhead calling migrants at 05:15AM (Thanks Tom!!) which included a good number of thrushes. At dawn, Bobolinks became apparent in large numbers, and sizeable flocks of these birds were still wheeling around the fields at Higbee's Beach as our regular Friday walk took place. Higbee's was interesting as there was a nice push of birds first thing, but variety was rather low. Good numbers of Black-and-white and Yellow Warblers, American Redstarts, Red-eyed Vireos and Common Yellowthroats were soon apparent and we notched up a very brief encounrter with a Connecticut Warbler (which Mike Fritz increased to two). Both Yellow-billed and Black-billed Cuckoos were at Higbee's too.

Before long, it was the Hawkwatch Platform's turn to be the center of attention and, as I write, birds are still passing through there at a heady rate. Ospreys, Bald Eagles, Northern Harriers and American Kestrels are dominating skies and seemingly interminable parties of shorebirds are whipping through, with an American Avocet so far being the highlight. But what of the real highlight for today? That began with a phone call from Gail Dwyer which really knocked us sideways. Gail had found her life Magnificent Frigatebird, hanging out wuth the gulls at Avalon!!! Once that message had come through, there was a mass departure from offices and homes as those in the know headed for the Hawkwatch Platform. A little over an hour after Gail had originally seen the bird at Avalon, Tom Johnson awesomely picked out the frigatebird - which at the time was way out there, over Second Avenue Jetty! Panic ensued but all eventually got on the bird, including those enjoying our Fall Migration Workshop. Gradually, the reason for heading for the Hawkwatch became clear, as the bird drifted slowly but surely towards us, before disappearing into the low clouds! Worrying moments followed, then Glen Davis pulled the bird out of the bag again and this time it drifted right past the platform and off towards Delaware. What a day; what a Cape May Day!! 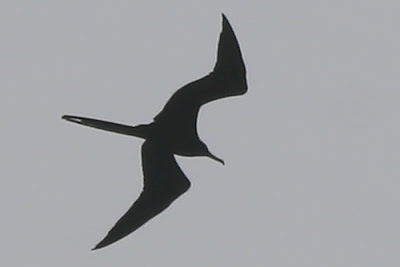 Always menacing, the distinctive outline of a male Magnificent Frigatebird drifts past the Cape May Hawkwatch Platform [photo by Mike Crewe].
Posted by Mike Crewe at 3:32 PM