We seem to have been going through a kind of slow preparation for Fall recently with a definite frustrated edginess to local birders as September continues to muddle along at an all too gentle pace. Despite this, I realise that it has been almost a week since we updated everyone on Cape May sightings - and I see that I have had a fair scattering of text messages during that time. So a quick recap is due.

We need to go way back to last Thursday, when an Olive-sided Flycatcher was reported perched near Higbee Dike and an end-of-season Roseate Tern flew west past the point, which brings us then to the birds already mentioned on that busy Friday - an increase in the number of Eurasian Collared Doves to four birds needs to be added to the tally for that day, as well as a late Upland Sandpiper flying over Stevens Street in the evening. Saturday started well with Michael O'Brien reporting overhead calls of up to 150/minute at Cape May Beachfront at 05:30AM and a Golden-winged Warbler was the first report of the day from Higbee's. A Yellow-headed Blackbird flew past the Hawkwatch Platform with Red-winged Blackbirds just after 09:00AM and was followed shortly after by sightings of perhaps a different individual of the species. An Upland Sandpiper set the tone for a good Hawkwatch Platform day and Higbee's Beach replied with Connecticut Warbler, Yellow-bellied Flycatcher and Philadelphia and Warbling Vireos. At least two different Wilson's Warblers were also reported from Higbee's. Saturday rounded off with a Mourning Warbler seen all too briefly at Cape May Point State Park.

Sunday saw something of a dearth of records from Cape May as many of the local, active birders were away on a pelagic trip out of Wildwood. Highlights that filtered through to me include the Brown Booby (seen on her favorite marker post in the dark as the guys headed out of dock!) 10 or so Bridled Terns, a Long-tailed Jaeger and two Audubon's Shearwaters. Smaller birds - but larger surprises - were two Yellow-breasted Chats which lingered around the boat a while and a Buff-breasted Sandpiper.

A further report of a Golden-winged Warbler at Higbee's kicked off Monday morning, then things went kind of quiet until Bob Ringler reported a Wilson's Plover from Stone Harbor. Despite much searching during what was left of the evening and the following morning, no other sightings of this bird were forthcoming. Tuesday began with a good morning flight at Higbee's, with a tolerable distraction for the Morning Flight Counter coming in the shape of a Buff-breasted Sandpiper at the canal impoundment (a great autumn for them continues along the Atlantic seaboard, with high numbers being reported from the UK too!). Reports of a possible Little Egret at Heislerville in Cumberland County were quickly followed up and seem to have unfortunately related to what appeared to be a rather unusual Snowy Egret with dull, grayish lores. Tuesday also produced the first of a run of nice reports from Brigantine over the last few days, starting with a Red-necked Phalarope, immature White Ibis and Black-necked Stilt (all species continue there today). Most intriguing of Tuesday's reports from Brigantine involved a report of 15 American White Pelicans flying over which sadly did not get tracked to Cape May! Our regular Tuesday evening walk wrapped up a busy day nicely with a Lark Sparrow at Stone Harbor Point.

Wednesday's opener came from Brigantine with Baird's and Buff-breasted Sandpipers and American Golden Plover reported and a Wilson's Phalarope joined the Red-necked Phalarope that was already there from the day before. Away from birds for a moment, Tony Leukering sent out what appears to be the first report of Cloudless Sulphur for Cape May County for the year, flying past the Hawkwatch Platform. These butterflies move north in late summer and generally by now, we would expect to have had reasonable numbers around for some weeks (Will Kerling reported the second from Cold Spring today). Onward to today (Thursday), and another report of a Yellow-headed Blackbird, this time from Morning Flight counter, Tom Johnson from Higbee Dike. I found time to get out into the field today to get updated on a few of our walk sites and found a great array of birds around Stone Harbor and Nummy's Island. At least 10 Marbled Godwits were present, Caspian Terns - perhaps 15 at least - were feeding in the channels and at least 12 Piping Plovers were still on the beach. A spectacular highlight however, didn't involve birds, but dragonflies. A seemingly endless stream of Green Darners was pouring in off the sea as the wind swung round to the west and tens of thousands appeared to be heading across the point in a broad front. At Nummy's Island, the insects were funneling across the main channel by the free bridge and seemed to be navigating due west along the road. We tried a few one-minute sample counts, simply involving any insects passing us along the width of the road; we arrived at totals of 400-500 per minute passing us in this narrow band - but binoculars revealed insects as far as we could see, until they became too small to see, way out over Stone Harbor Point. Virginia Retig quickly reported a similar phenomenon some 15 miles to the north near mile marker 25 on the Garden State Parkway; again, all were heading west. An incredible sight and something so typical of Cape May. Common Buckeyes were clearly moving south in good numbers today too and, with a big drop in temperature forecast (it's already down to 55F as I type), we may see the first pulse of Monarchs moving through (check out our new Monarch blog to see what's happening!). 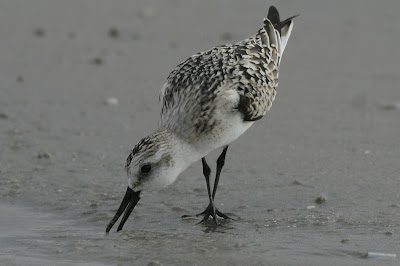 Wonderful, checker-backed juvenile Sanderlings abound on Cape May beaches at the moment [photo by Mike Crewe]. 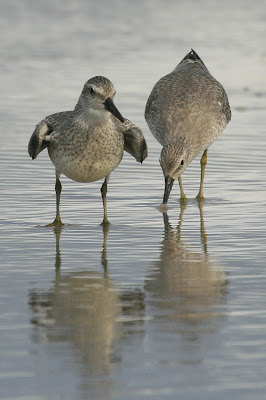 Any evidence of successful breeding is a step in the right for the western Atlantic Red Knot population, so it is nice to be able to report a scattering of juveniles at Stone Harbor right now [photo by Mike Crewe]. 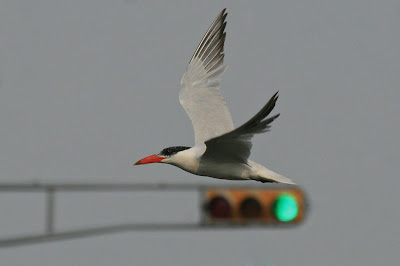 A Caspian Tern gets the green light to cross the bridge at Stone Harbor [photo by Mike Crewe]. 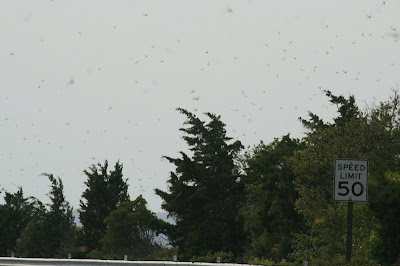 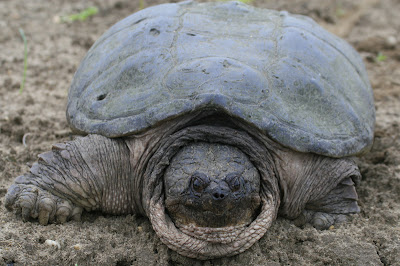 Beast of the week! This brute of a Snapping Turtle was caught in the open as it ambled across a field at the Rea Farm last Friday [photo by Mike Crewe].
Posted by Mike Crewe at 11:17 PM