On light southerly winds, Higbee's Beach remains not surprisingly quiet, but on the up side, the small flock of warblers that holds an interesting ensemble of both Blue-winged and Golden-winged Warblers - and apparently some intriguing hybrids between the two - continues to hang out around the margins of the first field (today seen on the edge of New England Road, near the main parking lot). Much of today's action has centered around South Cape May Beach, where a great array of gulls and terns can currently be found. Laughing, Ring-billed, American Herring, Lesser Black-backed and Great Black-backed Gulls, Sandwich, Royal, Caspian, Black, Common and Forster's Terns have all been seen today and numbers of Black Skimmers are gradually building too. A single Buff-breasted Sandpiper continues to hang out on the wet area at the back of the beach behind the South Cape May Meadows. Shorebirds are good up at Stone Harbor Point at the moment too, I hear and counts of up to 27 Caspian Terns have been made there recently. 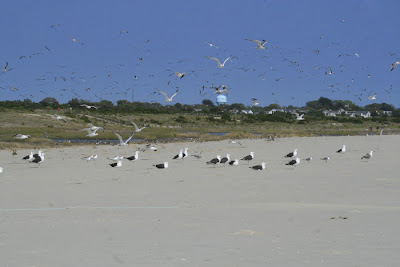 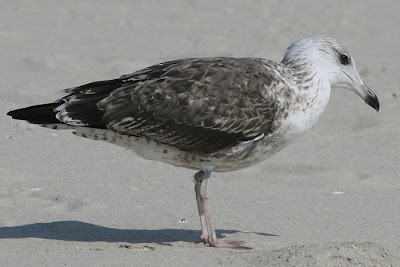 Five Lesser Black-backed Gulls - all second calendar-year birds - were found on the beach today, here's number one of three that I managed to photograph [photo by Mike Crewe]. 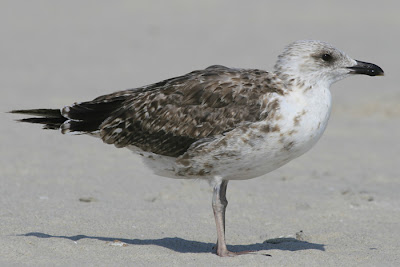 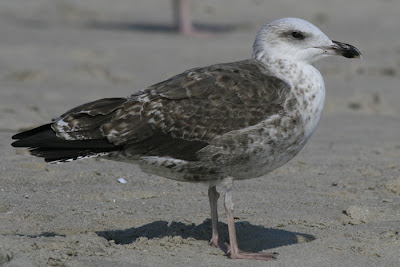 Lesser Black-back number 3. Note the extra amount of pale markings on the terials on this bird. Note also how variable the amount of pink on the bill is in these three birds [photo by Mike Crewe]. 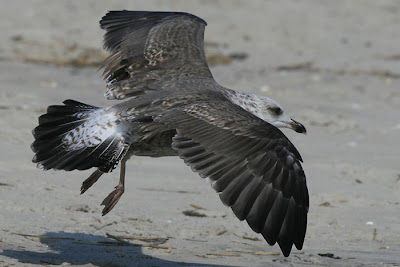 A flight shot of bird number 3, showing a typically dark tail with pale markings towards the base of the outer feathers only (somewhat intermediate between typical American Herring and Great Black-backed tail patterns). Note also the smoky gray color of the lower back and note that the inner primaries are more or less as dark as the outer primaries, not obviously paler which would be typical for American Herring Gull. [photo by Mike Crewe]
For a spectacle of a different kind, keep an eye out for the ball of thousands of Tree Swallows currently building up which can be anywhere from Cove Bay (behind 2nd Avenue on the edge of town) to the state park. These birds are swirling around and descending on the Bayberry bushes to eat the berries and rest before migrating southward. It's always kind of weird to see swallows sitting in bushes and eating berries, but it's a food source used by few other species (Yellow-rumped Warblers the obvious exception) and gives them feeding opportunities that other don't utilize. Some 5,000 birds are currently present so it's a spectacle well worth looking out for. 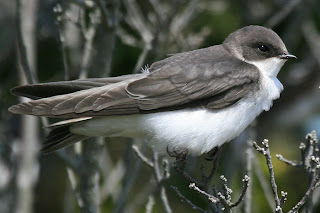 While resting, the Tree Swallows can be approached with care, allowing the chance to study the plumage and molt of individual birds. Here's a typical youngster, hatched this year and still showing a complete set of fresh, brown feathers on the upper parts. [photo by Mike Crewe] 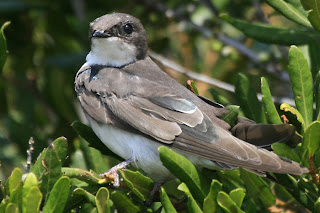 A slightly older bird which has started to molt into its first-winter plumage. Not the darker, grayer inner primaries, tertial (with neat white edge), and scattered lesser coverts at the top of the wing by the bill shadow. [photo by Mike Crewe] 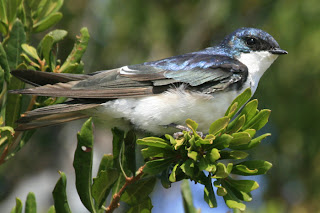 A typical adult bird at this time of year - note the contrast between the newer, inner primaries and the older, worn, outer primaries. Four species of North American swallow (Tree, Cave, Violet-green and Northern Rough-winged) molt their primaries and secondaries in North America, before (or during) their southward migration. All other swallow species wait and molt on arrival in the wintering grounds. [Photo by Mike Crewe] 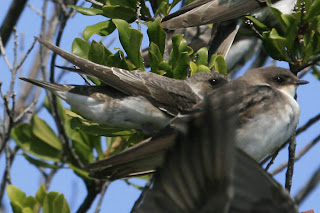 Always keep an eye out for something extra! I found this bird while reviewing my photos on my lap-top, but didn't notice it in the field! Notice how the bird at the back has pale tips and edges to its wing and upperpart feathers (compare with the bird half blocking it in front). Notice also that it has rather long and narrowly-pointed wings and the white from the underparts reaches up onto the neck below the face. This is actually a juvenile Bank Swallow, the only species here at Cape May that shows this suite of characters. So we can identify it, even without seeing the tell-tale dark chest band. [Photo by Mike Crewe]
Posted by Mike Crewe at 6:27 PM