Avalon sea ducks and other beasts

I wandered up to the Seawatch at Avalon with Richard Crossley's 500 mm lens in tow (and I mean that virtually literally; that thing is heavy!) this afternoon in order to photograph the great variety of sea ducks wintering there. I was not disappointed in the duck showing, but the sun didn't do me any favors by hiding behind clouds for most of my time there. Among the 100s of Surf and Black scoters, I did find the adult male Harlequin Duck, single digits of each of both species of scaup, one Horned Grebe, one Common Loon, and some eight Common Eiders. Also there was a nice flock of Purple Sandpipers that numbered 77.

Coming off the long jetty, I ran into Will Kerling who was perusing the ducks, too. We ogled and gabbed until it just got too dark for photography (1/250 sec at 3200 ISO is too dark). But, shortly before we departed, we noted a flock of birds high coming off the ocean, which turned out to be five Tundra Swans. I'd guess that they were attempting to winter somewhere farther north and their water froze and sent them packing. Once again, more proof that if one watches long enough in Cape May, one has the chance to see birds migrating on almost any day of the year. In a month, we'll be seeing northbound Snow Geese, Red-winged Blackbirds, etc. 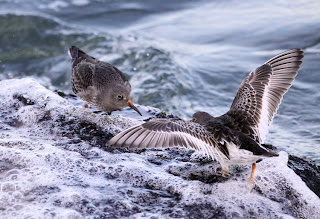 [Two of the 77 Purple Sandpipers on the sea-wall rip-rap and the long jetty at the Seawatch, Avalon.] 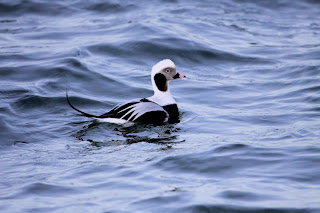 [Some sun, some sun, my kingdom for some sun! (Apologies to Shakespeare)] 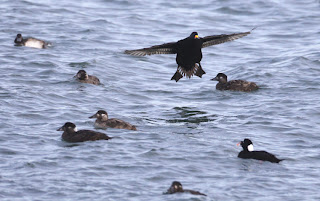 [Adult male Black Scoter landing amidst Surf Scoters, with one immature male Greater Scaup in the background.]
Posted by Tony Leukering at 10:34 PM