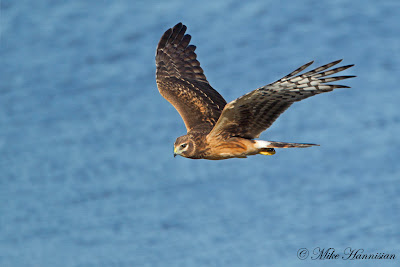 Tom Reed and Tom Johnson have been birding up a storm [while the rest of us are stuck at work. . .]. Check http://twitter.com/cmbobirds for their reports of Dovekie, Rough-legged hawk, Golden Eagle. . .oi. I mean, nice work, guys. TJ then went on to Seven President's Park up in Monmouth County, on a jerseybirds report of Red Crossbills, and found that species and a White-winged Crossbill, too! TR had an Eastern Phoebe at Higbee on Tuesday, and 2 Common Redpolls and 2 Northern Bobwhites at TNC's Cape Island Preserve the same day.

On Monday Mike Hannisian and Nancy Watson had a drake Harlequin and 30 Purple Sandpipers at the Stone Harbor Point jetty, and a Short-eared Owl over the dunes there. 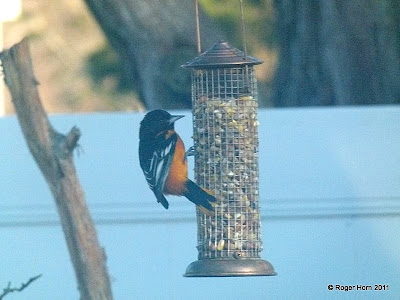 [A nice spot of mid-winter color, this male Baltimore Oriole appeared at Kathy and Roger Horn's feeders in the Villas on Monday. Most Baltimore Orioles winter from southern Mexico southward, but a few stay in NJ each winter, and even up into New England, although many if not most of these "half-hardy" lingerers perish.]
Posted by Don Freiday at 9:56 AM