Birds Along the Cohansey River 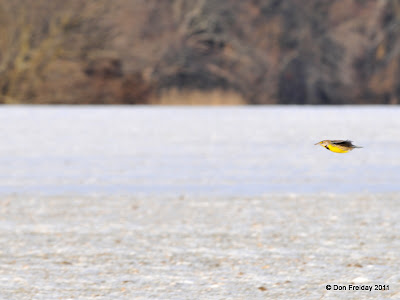 Back when the Le Conte's Sparrows showed up in a field along the Cohansey River (on private property, as it turns out), I commented that the Cohansey River watershed in northern Cumberland County is one of the best least-birded places in NJ. I have a sense that no one goes there regularly.  It's not mentioned in Bill Boyle's book Guide to Bird Finding in NJ. Pat and Clay Sutton didn't go that far north in their Birds and Birding at Cape May. But please, get yourself a county map and go exploring. There's Dix WMA on the south side, and public PSEG lands on both north and south sides of the river to seek out, and plenty of roadside birding, too. NJA's Birding and Wildlife Trails Program has a site guide to cover some of the area, but someone, someday, should do an exhaustive bird-finding guide to the whole Cohansey River watershed.

Yesterday, for the third year running, I canvassed the Cohansey during the annual Mid-winter Bald Eagle Survey. Yes, we found eagles - 23 of them - but, even without much time to properly bird, 55 other species wound up on the eBird checklist. We didn't stay until dark, but having been in this area for CMBO's annual Winter Marsh Raptor survey, I have no doubt Short-eared and Great-horned Owls would have been added if we had tried for them. I've posted our list for the day on the Field Trip Reports page; below are some photo highlights. 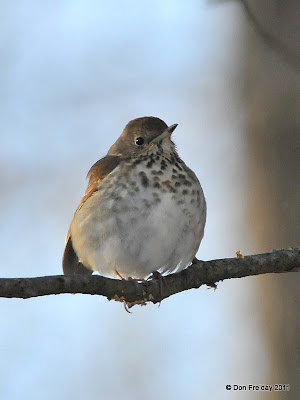 [Hermit Thrush at PSE&G access off Back Neck Road.] 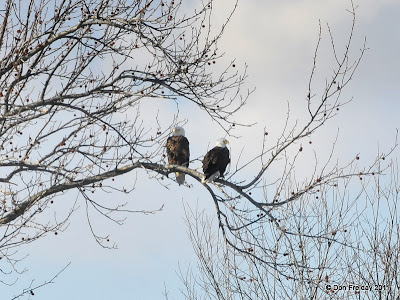 [It was an Bald Eagle survey after all. This pair perched near a nest along Bacon's Neck Road.] 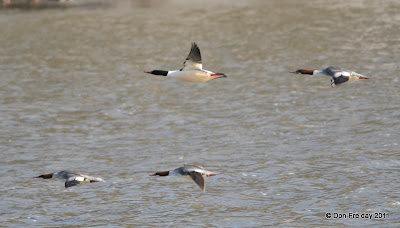 [Common Mergansers are tough to find in Cape May. They are a freshwater river bird, often wintering as far north as they can find open water. These were along the Cohansey just south of Bridgeton.] 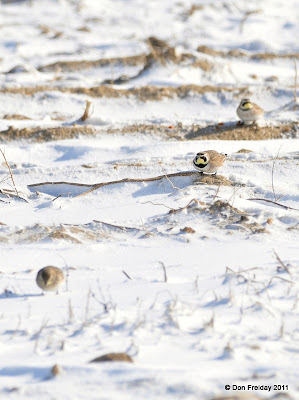 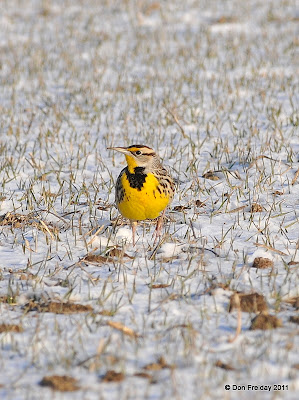 [Eastern Meadowlarks were a surprise highlight during our eagle count. The species winters regularly in southern NJ, but not as commonly as it used to, e.g. the 1957 Cape May CBC recorded 1100 (!). We saw about 30 on the day, most in agricultural lands north of the Cohansey River. Like their relative the European Starling, meadowlarks develop breeding plumage via wear. Pale brown feather tips can completely mask the yellow and black on some winter individuals until they wear away in spring. This one, probably a male, is in essentially breeding appearance, but you can see some brown tips on the black throat feathers; click to enlarge.] 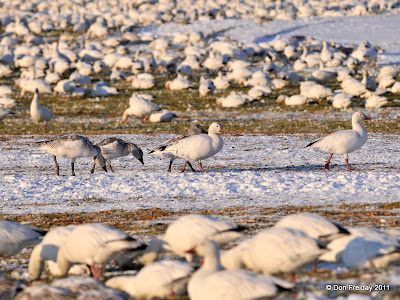 [Some of the meadowlarks fed in association with Snow Goose flocks, benefitting from the bare ground exposed by the hordes of grazing geese. Burrowing into the recesses of ecological training, this behavior would be considered commensalism, where one organism benefits from another without affecting the other organism positively or negatively. Note the family group of geese on the snow in this photo; geese migrate as family units. Note also how the juveniles are beginning to acquire pure white back feathers.]﻿ 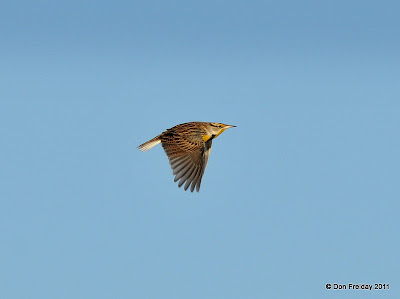 [Eastern Meadowlark flight profile. Plumage is distinctive, particularly the tail pattern, but so is the silhouette and flight style: stocky, pot-bellied, hump-backed, pointy-faced, with short triangular wings and flight of shallow, sputtering wingbeats followed by glides with wings held open. Sounds like I'm calling the bird names, but the parts add up to a delightful package! Click to enlarge.]
Posted by Don Freiday at 7:47 AM