Well, obviously, we wouldn't just post about such a thing unless there was a reason. Three Le Conte's Sparrows were found along Back Neck Road in Cumberland County during the Cumberland CBC today. I don't have extensive details, and don't know who found the birds (I hear they were seen by Paul Guris, but don't know if he found them). The directions I do have follow. Back Neck Road is also Route 601, out of Fairton, along the Cohansey River. Roughly 5 miles down Back Neck Road, Laning Wharf Road goes off to the right. Go past Laning Wharf road, and the birds were in apparently in the far end of first field beyond Laning Wharf, on the right. Take these directions as general guidelines. A number of us plan to look for the birds tomorrow, and will report results here.
The photos below are NOT of the Cumberland birds - they were taken near Galveston, Texas last April. 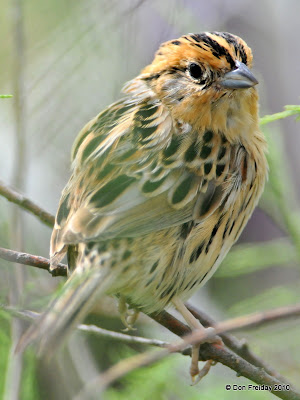 [From the rear, note the overall bright appearance, the orange face, the white edging to the tertials, and the distinct median crown strip.] 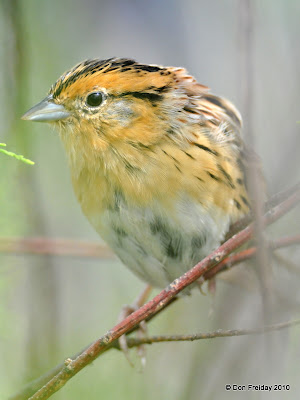 [This Le Conte's didn't show much in the way of breast streaks, though the flank streaks are obvious, crisp and black. Note again the median crown strip, orange face, gray auriculars, plus the gray nape with purplish spots.]
Posted by Don Freiday at 8:42 PM