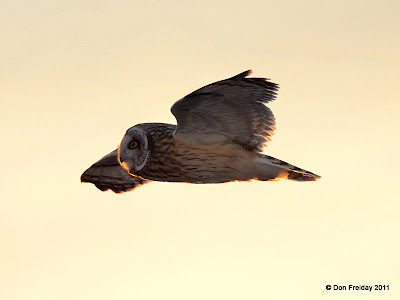 [Short-eared Owls are one of our two primary targets on CMBO's Winter Marsh Raptor Survey (the other, of course, is Northern Harrier.) This one was at my survey site at the mouth of the Cohansey River Saturday night. Click to enlarge photos.]

We dodged the bullet by having our Winter Raptor Survey Saturday night, when the winds were calm though the temperatures were cold, instead of our back-up night tonight (Sunday) in the rather harsh wind. Survey methods require wind less than 12 mph (Beaufort 3), with no precipitation. Full results will be posted on View From the Field as soon as all observers check in; volunteer observers do simultaneous point counts at 15 sites in Cape May, Cumberland, Salem and Atlantic Counties. I hear from Tony Leukering that 3 Short-eared Owls and a young Red-shouldered Hawk were at Jake's Landing for Saturday's survey, and Tanya and Lena Usyk and Dave Lord recorded 4 Short-eared Owls and 26 Northern Harriers at perennial hotspot Turkey Point. Angi Walters and Joe Delesantro had a dark morph Rough-legged Hawk at Forsythe NWR. Scott Whittle came up with 12 Northern Harriers at Bivalve.

My spot for the past three years of the survey has been the mouth of the Cohansey River, viewed from the north side at the end of Ragged Island Road. Three Short-eared Owls hunted there Saturday, and three Bald Eagle nests are scope-able from there, too (though two are very far). Not to mention 3 "Gray Ghosts," and 7 female-plumaged Northern Harriers, and at least 3 Great-horned Owls. 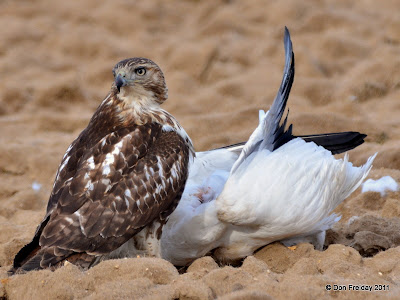 [This immature Red-tailed Hawk was on a freshly dead Snow Goose in northen Cumberland County on Saturday. Did it kill the goose? I don't know, but lean towards yes. I watched an adult RTHA consume nearly the entire breast of an Atlantic Brant at Forsythe NWR  in December, and wonder too, did the hawk kill the brant or just scavenge it?] 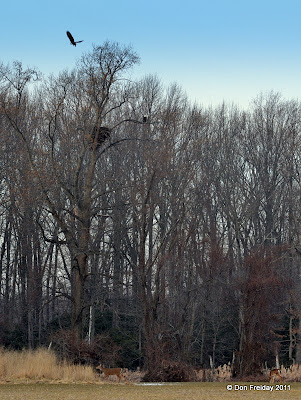 [Bald Eagle nest in the Cohansey watershed Saturday, with deer underneath. Most south Jersey eagles will be on eggs by the end of the month.]
Posted by Don Freiday at 9:51 PM