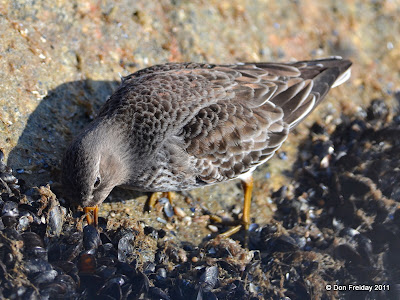 [If you get the light just right, and use your imagination. . . Purple Sandpiper, 8th Street Jetty in Avalon today. Click to enlarge photos.]

Avalon had a neat flock of sea ducks this morning, as it has all winter. Among the Surf and Black Scoters were a drake Harlequin, a hen Greater Scaup, and plenty of Long-tailed Ducks. Purple Sandpipers and Ruddy Turnstones populated the jetty at 8th street, Common Loons fed on crabs nearby, and many, many gulls took advantage of a low tide to extract blue mussels from the rocks.

Bill Boyle re-located the continuing Lincoln's Sparrow at the entrance to Cape May Point State Park, near the fence. There was no word today on either the Grasshopper Sparrow or the Orange-crowned Warbler found initially by Jim Dowdell at "Cove Pool" yesterday; Cove Pool is the east portion of the meadows accessed from the Mt. Vernon. Ave. dune crossover.  A female Redhead has been trading around between the limited open water in Cape May, having been seen both at Lighthouse Pond east in Cape May Point State Park and in the South Cape May Meadows. 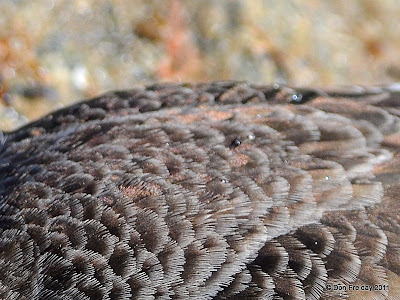 [Purple Sandpipers do indeed have a purple sheen on some feathers - Tony's bird below shows it, as does this one. Same photo as above, zoomed in close.] 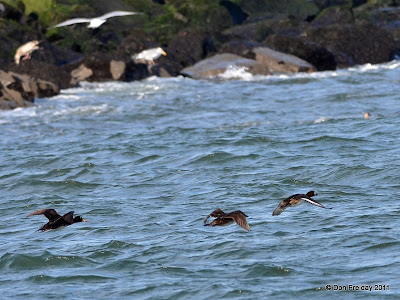 [Greater Scaup female leads female and male Surf Scoters at Avalon today. Note how the wing stripe extends well out onto the primaries, and boldly.] 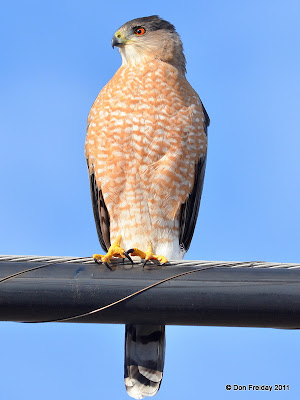 [This adult Cooper's Hawk sat unafraid along Second Avenue in Stone Harbor today. Sharp-shinneds seldom, if ever, sit on an open utility line like this.] 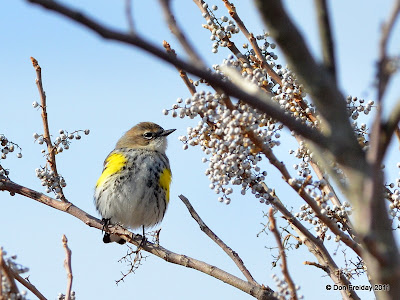