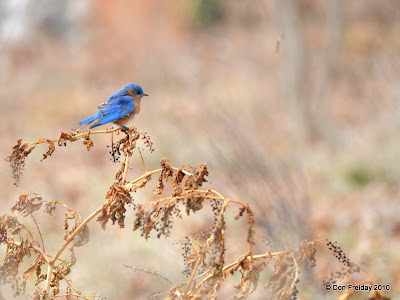 [Eastern Bluebird considers his options atop a shriveled Pokeweed at Villas WMA Monday afternoon. One consequence of the epic flight of October 29-31, 2010 is that food resources for wintering birds were depleted by the hordes. Click to enlarge photos.]

It's a quiet time of year, relatively speaking. We always say migration happens year round, and it does. . .but not much in mid-January. Nonetheless, the Cape May County 2011 list is up to 162 species, according to eBird. That's a pretty fair total, e.g. the next closest NJ county (Monmouth) has 128 species for the year entered in eBird. Lest we get feeling too proud: while there is no easy way to ask eBird what county has the most species, at least not that I am aware of, I guessed Los Angeles County, California, and the report yielded 280 so far this year.

While we're on the subject, in all of 2010 Cape May birders eBirded 334 species; the next closest NJ county was again Monmouth, with 288 (NJA happens to have its Sandy Hook Bird Observatory in Monmouth, think there could be a connection?) How about L.A., you ask? 401 on the entire year, 2010. Some of this has to do with how many people use eBird in a particular area, not solely how many birds there are. And of course, species lists represent but a fraction of the birding experience.

Back to the birds. Bob and Stephanie Brown and Will Kerling had the year's first (I believe) Black-headed Gull last Friday, seen from the Mt. Vernon meadows crossover. Tom Reed and Mark Garland were out on Monday and had a flyover Red Crossbill at Cape May Point State Park as well the continuing Lincoln's Sparrow there, near the entrance. Tom Johnson had a wintering Black-crowned Night-heron and a Short-eared Owl in the marshes along Rio Grande Avenue where it runs into Wildwood Crest.. It seems to be a fairly good year for Short-eared Owls, we're up to about 18 on the Winter Marsh Raptor Survey conducted last Saturday, with not all observers reporting in yet. 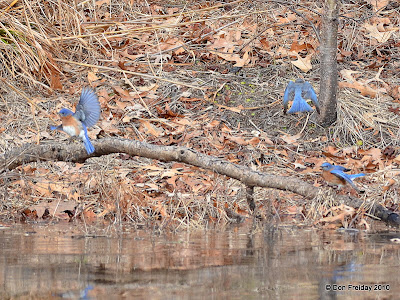 [These Eastern Bluebirds at Villas actively foraged at the edge of a mostly frozen pond, apparently pursuing minute insects.] 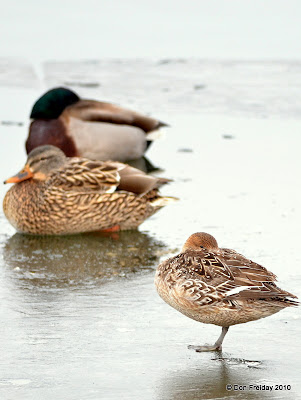 [She's still there, "she" being the hen Northern Pintail wintering at Lake Champlain in the Villas. Someone should name this bird - Nancy, maybe? Note the white bar in the wing - formed by the tips and edges of the secondaries, it's a great field mark for pintail when you can see it, which isn't all the time. How visible the white is on a standing or swimming bird depends on how the wing is laying in relationship to the tertials above and the flank feathers underneath, which sometimes cover the wing.] 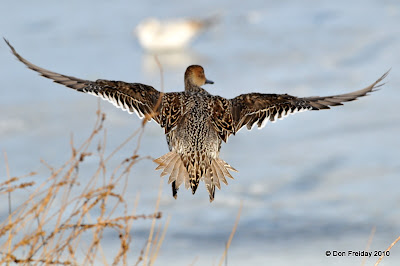 [Here's where the white is on the female Northern Pintail in flight. Pintails are early northbound migrants, so she'll probably leave Lake Champlain by mid-late February. Pintails stage in large numbers in the tidal marshes of Delaware Bay in Cumberland and especially Salem Counties. It's worth the trip there in late February.] 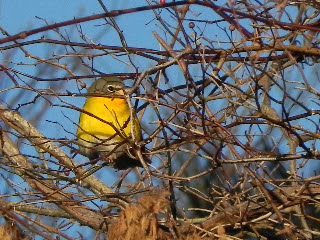 [Mark Garland and Tom Reed had this Yellow-breasted Chat feeding on a paper wasp nest at Cape May Point State Park Monday. Photos by Mark Garland.] 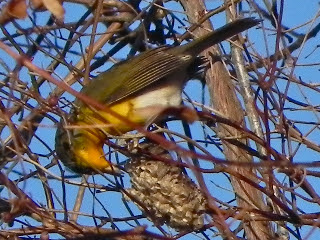