Having just mentioned the great dragonflies that are swarming around Cape May at the moment, it seems only right to also draw attention to the amazing butterfly year that we are having. Even just a cursory glance at the wonderful South Jersey Butterfly Blog, managed by Jack Connor will give you an insight into what a great time the region's butterfly enthusiasts are having. As with the dragonflies, the warming climate seems to be pushing pushes towards us, both from the south and from the west and now is a good time to keep an eye out for a number of unusual species. Here's a batch of photos that represent what was, what is and what may be... 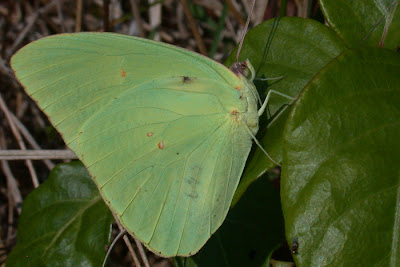 Cloudless Sulphur is a regular immigrant from the south, arriving in varying numbers according to weather conditions. Last year, I didn't see a single individual in Cape May County; this year, numbers seem to be setting new records and it really is impossible to miss them unless you are seriously desk-bound! [Photo by Mike Crewe] 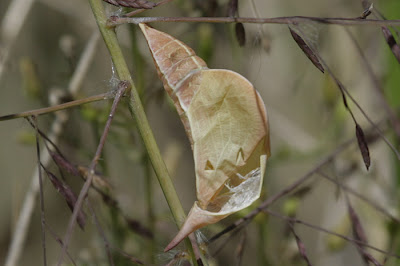 It's not often that there are enough Cloudless Sulphurs around to start looking for their crysalises, but we are now finding lots of these yellowish, papery, empty cases all over Cape May [photo by Mike Crewe]. 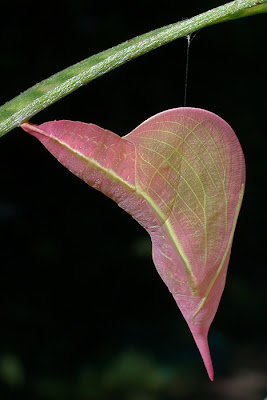 To really be amazed at the beauty of Cloudless Sulphurs, however, you need to find a living chrysalis, before the adult butterfly has emerged. This fabulous pink 'dead leaf'' was photographed in Pat Sutton's wildlife garden [photo by Mike Crewe]. 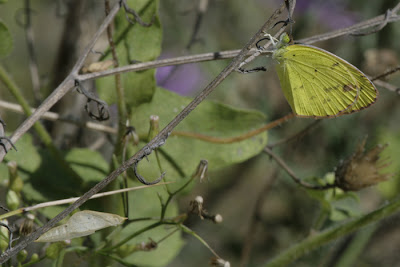 Little Yellows have been a real revelation this year; this southern species, that historically has had periodic ups and downs in populations at Cape May Point, has been seen throughout Cape May County, so it has been a good time to look for more than just the butterflies. Here, a freshly-emerged adult dries its wings, while its empty chrysalis case can be seen down at lower left [photo by Mike Crewe]. 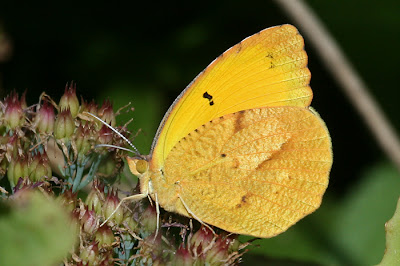 If you are looking at the yellows and sulphurs and trying to work out the different species, don't forget to keep in mind Sleepy Orange. With all the other great butterfly species turning up this year, it is perhaps surprising that there hasn't been more Sleepy Oranges around, but there is still time to get your eye in and find one of these attractive insects [photo by Mike Crewe]. 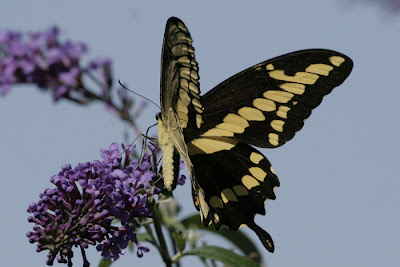 Perhaps the 'Grand Prize' of southern butterflies in Cape May, this Giant Swallowtail in Villas on September 13th was one of at least three to have been reported in the county so far this year. This is a good one to keep an eye out for over the next month or so - note the pattern of yellow spots on the black background on the upperside [photo by Mike Crewe]. 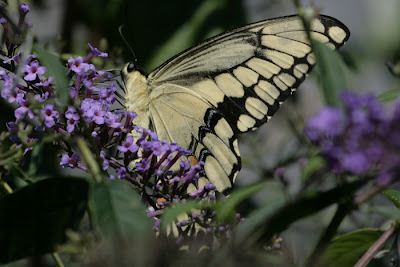 From below, Giant Swallowtails are predominantly yellow, unlike our more regular dark swallowtail species [photo by Mike Crewe]. 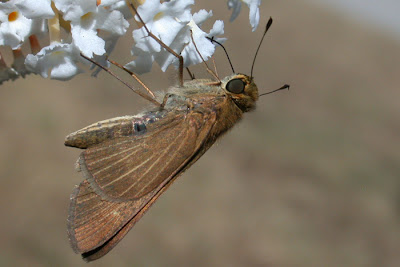 Not so much a looker as the Giant Swallowtail, the Ocola Skipper is a less than annual visitor to Cape May, but this year there are unusually high numbers around Cape May Point. Note the relatively long, narrow shape and the overall dark brown coloration. Check out flowering patches of Butterfly Bush, Lantana or Zinnia [photo by Mike Crewe]. 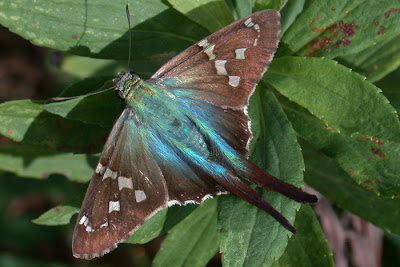 Another choice butterfly from the south that has arrived in much higher than average numbers this year, the amazing-looking Long-tailed Skipper is showing up throughout the county right now, with some double-figure counts coming from Cape May Point surveys. The blue-green color seen here is not always obvious, especially from below, so it is best to look for the distinctive long 'tails' [photo by Mike Crewe].
Posted by Mike Crewe at 6:53 PM