Larking about at the point...

As a very warm - and very humid - period of weather settles in on us, Higbee Beach has not been a good place to be for some time now, as witnessed by Cameron's posts from the Morning Flight. But Cape May always has an alternative up its sleeve and the area around the state park and South Cape May Beach has been providing birders with some great early fall action. Careful checking of the ever-increasing numbers of gulls and terns on the beaches has paid off with the discovery today of two very interesting gulls (I know, not everyone's cup of tea!). One large, chunky one shows all the signs of being a hybrid between American Herring Gull and Great Black-backed Gull, while the other is a noticeably dark Lesser Black-backed Gull which shows the plumage characteristics of the race intermedius. Typically, Lesser Black-backs in North America are of the slightly paler-backed form graellsii. All interesting stuff. A single Black Tern was still hanging on today, among a gathering of some 250 Common Terns near the bunker, while one or two Caspian Terns have also been passing through (small numbers may also be seen up at Stone Harbor at the moment too). Up to four Buff-breasted Sandpipers have favored the more densely vegetated back part of the South Cape May Beach and head up a star list of shorebirds; with raptor movements being slow today, Tom Reed had time to tally shorebirds flying by the Hawkwatch and his totals included 101 Pectoral Sandpipers, 37 Stilt Sandpipers, two Whimbrel, 17 Red Knot, one American Golden Plover and 383 Lesser Yellowlegs. Though warblers in general have been notable by their absence, Yellow-rumped Warblers have been surprisingly noticeable with several individuals already noted - the appearance of this species is usually seen as a sign that Fall is coming to an end!

Over in the backbays, Tricolored Herons continue to show well around the Wetlands Institute and Nummy's Island areas and Brown Pelicans are worth keeping an eye out for as groups of up to six have been seen from Sunset Beach, all the way round the point and up the beachfront to Stone Harbor. Four passed right over my head when I was on the free bridge between Nummy's Island and Stone Harbor yesterday. At least eight Western Sandpipers were scuttling around on the Stone Harbor beach yesterday and 10 Piping Plovers remain at the point there.

Well, that's what passes as a quiet period for Cape May! One final bonus has been the appearance of a scattering of Lark Sparrows this past few days, culminating in a very obliging bird that fed for most of the day right on the track at the westernmost of the two dune crossovers behing the South Cape May Meadows. Most of us paid our respects and a fine array of photo opportunities were snapped up! 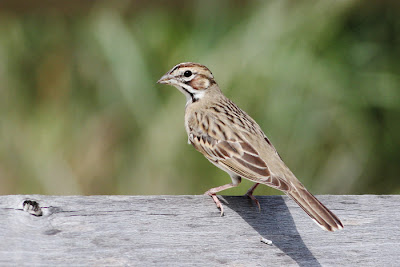 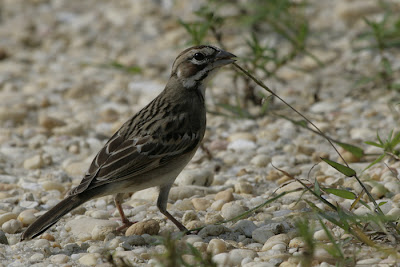 Lark Sparrow at South Cape May Meadows today - note how a change in light can produce a very different-looking bird (photo by Mike Crewe). 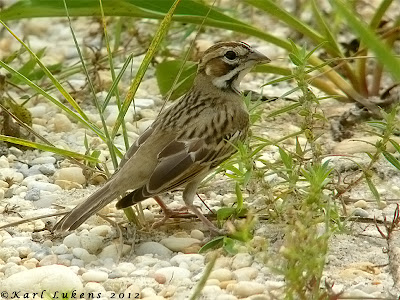 Lark Sparrow at South Cape May Meadows - once considered to be essentially a south-western species, Lark Sparrows are now expected in small numbers at Cape May in Fall (photo by Karl Lukens). 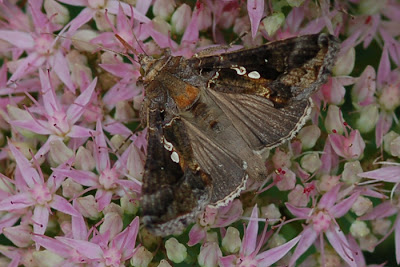 There's much interest in the notable insect movements around Cape May at the moment and today attention switched to the large numbers of Soybean Loopers that were swarming through the area and feeding at flowers from Cape May Point at least as far north as Goshen. This species habitually moves north in good numbers periodically and it looks like we are going to have a good year in 2012 as the southerly airflow continues to push insects northward (photo by Pat Sutton).
Posted by Mike Crewe at 1:35 AM