Migration continues slow but sure

Slow but sure has been the order of the day for migrants over the last few days. Glimmers of hope lie in the hope of cold fronts and North-west winds lurking on the horizon, only to have them dashed by belts of wet weather to the north of us which grounds any migrants that might be heading our way. Predicting the occurence of good falls of birds at Higbee Beach remains a real hit and miss affair with so many variables being thrown into the equation. Today did bear quite a few signs of being a busy day for birdwatchers, but things were quieter than had been hoped. Nevertheless, there was a nice run of Blackpoll Warblers this morning and good numbers of Black-and-white Warblers, Northern Parulas and Red-eyed Vireos continue to filter through. Keep an eye out for Red-breasted Nuthatches around Cape May too as they are still moving through at the moment. Unexpected treats included a Yellow-throated Warbler on the red trail in Cape May Point State Park and a Stilt Sandpiper on Bunker Pond. A good falcon flight took place today with Peregrines giving a particularly good show over Lake Lily this morning and a steady procession of American Kestrels and Merlins passing the Hawkwatch Platform this afternoon. Parasitic Jaegers are being seen fairly frequently in The Rips now and Steve Glynn reported a Great Shearwater off St. Mary's early morning.

The Seawatch started this weekend, so do please drop by at the north end of Avalon if you have a chance and see what's passing offshore - daily totals will be posted on our Seasonal Research page. Vince Elia got things going well there today with an early Common Eider.

Today didn't quite perform as well it might for birds, but our six-legged friends continue to draw the crowds. Monarch migration is in full swing now and both dragonflies and butterflies continue to provide much to look at. Michael O'Brien reported four species of saddlebags at the point today (Carolina, Black, Red and Striped) while Will Kerling found a very obliging Clouded Skipper which remained in one small area on the red trail in the state park long enough for several people to catch up with this species, which seems to be rarer now in Cape May than it was a few years ago. 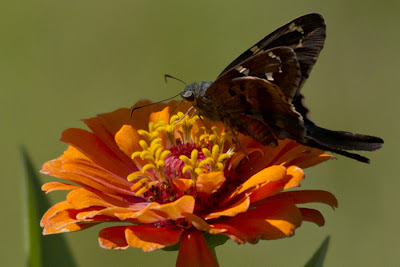 Among a wonderful array of southern and western butterfly species being recorded in Cape May at the moment, perhaps the most unusual in appearance is the Long-tailed Skipper. This species is readily recognized by its long hindwing extensions and is currently being reported from all over the county [photo by Sam Galick]. 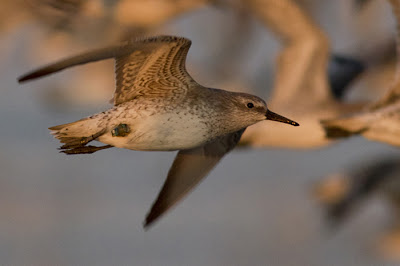 Red Knot are present at Stone Harbor Point in good numbers right now. If you go looking for them, check carefully for any banded birds as reports of these all help to further our knowledge of this global traveller. This bird is carrying a geolocator datalogger, a device which collects and stores details of the bird's whereabouts, which can be downloaded and analyzed at a later date [photo by Sam Galick]. 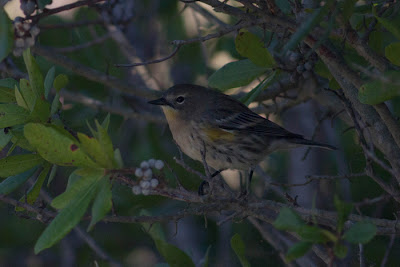 This bird skulked in bayberry bushes beside Bunker Pond in Cape May Point State Park on Saturday and set a few discussions going. It appears to show many of the features of Audubon's Warbler - the Western race of Yellow-rumped Warbler - but there are perhaps one or two anomalies in the plumage and the jury is still out as to whether it can be considered a true Audubon's, or whether it is perhaps an intergrade or hybrid between the Eastern and Western populations. Note the yellow wash to the small, pale throat area which favors Audubon's, but the suggestion of a supercilium and one or two other, weaker, features are rather ambiguous [photo by Tom Reed].
Posted by Mike Crewe at 8:15 PM